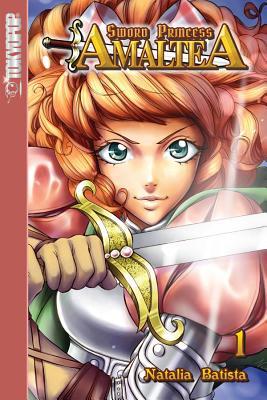 I was quite interested in this manga-style comic, especially because of the blurb. Welcome to the world where the roles are flipped. Princesses save princes and then marry them. Princesses kill the dragons. You can imagine that this sounds really fun, but what if you are the kind of princess like Amaltea, and just don’t want all this.

Yes, Amaltea is spoiled, at times annoying, at times frustrating, and way too trusting, but I did like her at the end. In the end she really showed some progress, though she has a long long way to go for me to fully like her.

She is on a quest to find a prince, and she does find one. But it is kind of like finding herself. The prince is not a happy camper that she kissed him awake and is now taking him with her (and letting him walk while she is on her horse). But as the story continues we see them connect, we see them get closer, though again, like with Amaltea’s kindness, they have a long road ahead of them. Hopefully the journey to Ossian’s home country isn’t going to be a short one.

Though given the trouble they get into, mostly thanks to Amaltea and her being an out and proud princess, I think the journey will take a while. Especially when we see that twist near the end, plus the flashbacks on why Ossian isn’t so happy with woman all going hot and bothered because of him.

The art, well, where to begin. At times I quite liked it, but at other times not so much. The style was a bit rough on the edges, and I really had trouble with seeing if a person was he or she. For instance our prince is super feminine so I thought for quite a bit that there would be a twist that he was a she. Then there are other characters, like Tibius, who is apparently a dude but I thought he was a girl until it was mentioned. 😛
Also sometimes the body proportions were out of whack. People would shrink or grow or stretch at random times.

Will I be reading the next book? I am not sure yet. On the one hand yes, because I want to know who that person is that is dedicated to our prince, I want to see Amaltea get a bit nicer and kinder, and of course I want to see our prince home country. And then there is Amaltea’s family who is kind of looking for her as she ditched her guards.