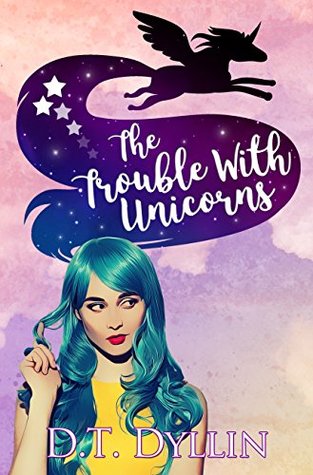 I received this book from Xpresso Book Tours.

I dropped this book at 55%. Good, since I had a bit of a stressful/sad/not happy day, I just wanted to write the review now instead of tomorrow. So here goes. I got a ton of disappointment to throw out.

This book. When I first saw the opportunity on Xpresso Book Tours I was in love with the book. It had all the ingredients to become a favourite of mine. That cover for instance, but also a fun MC, maybe some banter between her and her new guardian, some romance and more by the sound of it, and did I mention the supernatural beings? Including our MC who is a unicorn! Yes, a freaking unicorn. I was so delighted when I got the mail that I was accepted and that I could read the book. But dang, I kind of wish I hadn’t and just had kept my dreams whole.

The first pages were good. Then Bryn popped up and instead of shipping these two or enjoying their banter, I was unhappy. These two are supposed to work together to form an awesome team of demonhunters? Hah, PHAH. No way. Throughout everything they keep being asshats towards the other (yes, Talia, you are an asshat as well). Talia tries to magic him happy (fails), she drives so fast that Byrn feels sick and even worse, Talia just doesn’t seem to get that the poor fella is just not that happy to be her permanent guardian (because hey, maybe a destined life isn’t so fun as you may think). But Byrn, oh God, I hated Byrn. That was definitely the biggest asshat in existence, he kept being mean, rude, pissy, and made Talia feel absolutely shitty. And that was even before the shit he did later on in the book that made me drop this book because I couldn’t stand that creepy shit (not to mention that I couldn’t stand all the other things, but it was definitely the last drop).

Oh and did I mention instant lust? As that is what I would call it. Not love, oh no. I would never see these two love each other. They just don’t have a healthy relationship.
Especially later when, after 2 times sex (and not with any time between, just immediately after the first time), Byrn marks Talia with an Anam Cara tattoo, meaning that she is his. Forever. Or well, probably until he dies, which I could definitely arrange. 😐 Yep. This dude. He is being an asshat throughout, cares not about Talia (even gives her a nickname that she hates and come on RU???), but after putting his dick in twice decides it is totally the coolest idea to mark her for life as his mate. The hell mate, no you don’t. That is just a big fat NOPE and a big fat red flag in my book.
Maddie, one of the characters I actually liked, is of course totally pissed and totally upset about this. How could Bryn do that? However, and this is what turned me away as well is that Talia doesn’t seem to have a problem with it. She acts like so many girls who have been abused or other stuff, she thinks she instigated it (oh, no honey, oh no), and that it isn’t that big of a problem. Sure, she is pissed, but apparently not enough as she quickly rips off Bryn’s clothes and just continues blissfully having sex. And then talk that maybe they can work out things. No. Just no. This is not OK. What the actual fuck. So the message here is that a dude can just mark you for life without any reprimand or shit? And that it isn’t even his fault? What the actual fuck. No, just no. This just gave me such a bad case of shivers and disgusted feeling. Yuck. Just yuck.

The demons? I was expecting lots of kick-ass demon stuff, but instead the 55% is Talia running away from clowns, kids, and not doing a lot. Then again, even if she was near a demon, her precious dragon would need to do the stuff as our girl is afraid of blood and gore. Um. Hello. What? Plus her plans to get a demon out of a kid is kidnapping said kid and bring that kid to her van (and yes, the van is white and you can’t easily look inside). Yep. Um. No.

I did like Maddie. I would definitely not mind a book with this girl in it as MC. She was sweet, interesting, and reacts just as I would when my best friend would show up with a mate-for-life tattoo in her neck after just some casual sex.

The idea that this world features more supernatural stuff was interesting, and while I could understand that Talia doesn’t want anyone to know about her being a unicorn, it still felt a bit eh. Especially given how she keeps all things hushhush but then makes a shirt with her name and what kind of supernatural being she is. 😛 And even mentions the team name at least once. Sure, it wasn’t meant to go outside (and you probably didn’t mean to shout it), but it happened, and sorry, why?

Talia was hit and miss. At times I quite liked her, but at other times I just wanted to lock her in a room and throw away the keys. Plus she was so whiny. Everything had to turn around her or else.

And Bryn was just terrible. He has got some sob story that magically had to be inserted, but instead of going aww, I was just rolling my eyes.

I could probably talk more about this book, but frankly I just want to forget I read this one. Burn it out of my mind if I could.

So would I recommend this book? Nope, nopeity, no. I am glad that I was able to read this book as a review opportunity, now I know to avoid these characters should they pop up in other books.

Some information on the book for those that may want to still try it:

Part-time demon tracker, full-time optimist …
Talia White does what comes naturally to a unicorn: Balances the scales between light and dark with hefty doses of love and joy.
Faced with a string of high profile demon possessions, Talia is determined to do her job, despite the fact that she finds herself strapped with a brooding dragon warrior as her new guardian.
That’s the trouble with unicorns … they’ll accomplish their goal one way or another, even if they have to get a little stabby to do it.