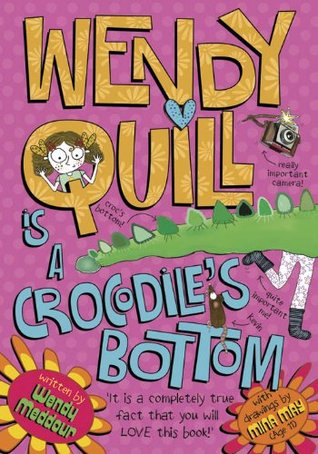 When I grabbed this book I was under the impression all those things mentioned on the blurb would mean one big story. But no, it is even more fun than that. This book actually has 3 short stories, and you can read them in any order you want.

First Act: Wendy Quill is a Crocodile’s Bottom: 4 stars. Time for a school musical, this time Peter Pan! Wendy hopes to get the main role, but gets to be the crocodile’s bottom. At least she gets to say Tick Tock, so she got that going for her, which is nice. I loved seeing the play, and then especially the chaos as the crocodile is just going around without knowing where to go.
I am glad that eventually she stopped moaning about why she should be Wendy (and she thinks of quite some reasons, much to the annoyance of her teacher). Plus she actually had fun playing as a crocodile.

Second Act: Wendy Quill’s Amazing Sensible Shoes: 4.5 stars. How terrible shoes get you a role in a fun tapdancing musical. Yep! Poor Wendy has to wear sensible shoes, and while she hates them as they are ugly, she is going to be seeing a side to them that she actually quite likes. I loved that she got the chance to participate, and I double loved it that she was good at dancing even when she never had a chance to do it until now. And how much fun was it that the musical was Wizard of Oz! Plus she could play the role with her best friend Florence, two little Munchkins. When x happened to Florence, I knew immediately what was going on and hoped that people would be in time to help her out. Poor Florence, but what a friend Wendy was to do that for her friend. I did feel sorry that she felt guilty, as it was her idea to put that stuff on. 🙁 No need to feel guilty, you didn’t know. All in all, a super fun story.

Third Act: Wendy Quill Catches The Plague: 5 stars. Oh my goodness, this was just the best. Why couldn’t we have this stuff when I was in school? A whole class on The Plague. You have to dress up (and I loved what Wendy’s family did so she was all perfect for the day), you can make rats, while playing they even played having The Plague, there were all sorts of fun facts, and hey, even Tyler the annoying brat is curious about something for once. 😛 I wasn’t a big fan of the photographer/reporter, but I guess that he just got tired of all the boring stuff/kids annoying him. I had a laugh at what happened in class, and how everyone reacted. Wendy sure was the hero of the class. I know I would have done the same as her though, rats are so adorable. 🙂

I have to say that at times I found Wendy a bit too much. Especially in the first story she is quite obnoxious about stuff. Yes, you are called Wendy, that doesn’t mean you SHOULD get the role in a Peter Pan musical. She also thought she was also so much better than the rest, and sorry, that attitude is a no-no with me. Thankfully she doesn’t do it too much, and I also could see another side to Wendy, a kinder and sweeter side. Plus I liked her scientific facts, and her trying to use difficult words (though she wasn’t doing a good job, but at least she is trying).

I did think it was a bit weird that she says everyone calls her Wheezy Bird, but with the exception of Tyler, her dad, and Florence (when warning Wendy about her wheezy laugh), everyone just calls her Wendy. 😛

I also quite loved the illustrations, I have to confess those were one of the main reasons for picking this book up. They looked adorable and fun.

All in all, a super fun book, and I definitely need more of Wendy Quill. So I will be buying the rest of the books. I would recommend this one to everyone.