Welcome to a special promo, specially made for summer… Summer Promo Reads are here! Today I am featuring a book that fits perfect with those warm summery days: About Last Summer by Patricia B. Tighe.

I got a brand-new excerpt for you all (as I also participated Release Day Celebration/Cover Reveal), so scroll down to read an interesting encounter between Noah and Gabby. 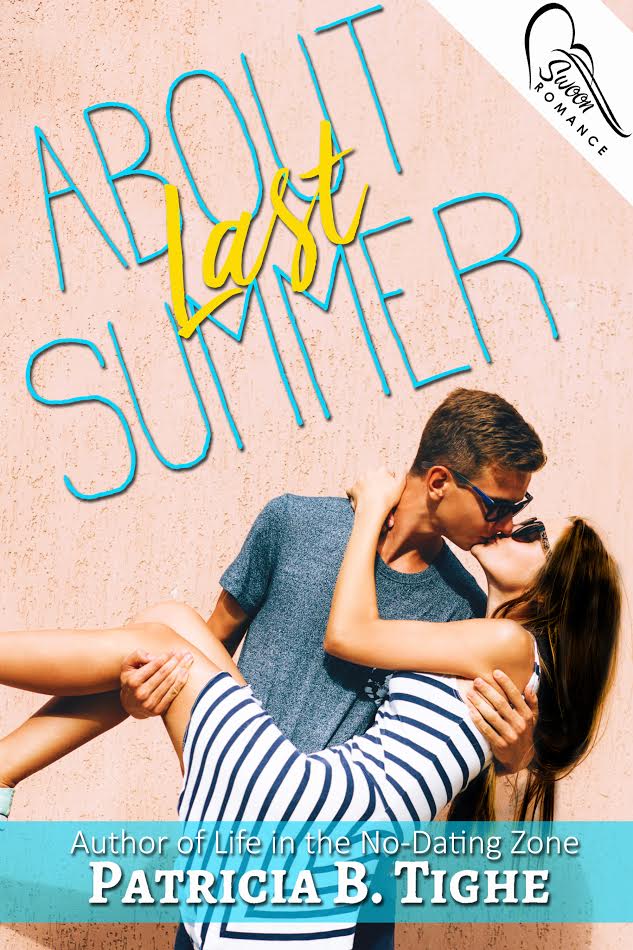 Pretend to be from Spain? Act like she can barely speak English? Sure, why not? It wouldn’t be the first time Gabby Vega had agreed to a challenge from her best friend, Kenzie. Besides, it’s only for a week of vacation with Kenzie’s cousins. Gabby will prove to Kenzie she can keep up the fake identity for the whole trip—that she’s not a quitter.

There’s just one major surprise. Noah Jernigan is also staying with Kenzie’s cousins. Noah, the boy she fell in love with at drama camp last summer and the boy she had to dump when it was over. The boy who knows who she really is.

Noah can’t believe it when Gabby appears at the Bryson’s vacation home in the New Mexico mountains. He hasn’t seen her in a year. It practically took that long just to get over her. And now she’s Gabriela from Spain? All he wants is to get as far away as he can. Or maybe the exact opposite. Stick as close to her as possible and find out what the heck happened last summer. And definitely get some payback.

Now Gabby has to keep Noah at arm’s length as she pretends to be Gabriela. She doesn’t want to answer his questions or rehash last summer. Because one thing is clear—the more time she spends with Noah, the more she’s in danger of falling for him all over again.

The mother of two grown sons, Patricia B. Tighe lives in West Texas with her husband and dog. She eats way too much pizza, drinks way too much coffee, and watches way too much NFL football. On the bright side, she also reads and writes teen fiction. She promises to include as much romance, angst, and adventure as possible in her books.

I was three measures into a different Celtic song when a sound broke my concentration. A footstep? Probably not. I frowned and kept playing. But somehow, the shades of darkness shifted. I squinted. Someone stood on the blacktop where we shot baskets, half hidden by the side of the deck.

My heart rate picked up. There was only one person it could be. The others were inside, and Amanda didn’t go anywhere without Haley. I kept playing, just more quietly. “You can come out,” I said. “I know you’re there.”

Gabby’s voice came from the blackness. “How?”

I waited until she reached the bottom of the steps. “A shadow moved or something.”

“Oh.” She stepped up and sat on the stair just below the deck’s floor. “That sounds familiar.”

Crap. I’d been playing her song again. I purposely plucked the wrong string, the flat note twanging out like a slap. “Haven’t played it in awhile.” Idiot, idiot. You played it a few minutes ago. If she was outside, she heard it.

She leaned back on her elbows and faced the backyard. “It’s still good.”

I could’ve switched songs. I so wanted to. But a perverse need to show her just how great the song could be filled me with determination. So I let myself fall completely into the music, each note ringing out with precision and aching sweetness.

Finally, when my chest was so tight I could barely breathe, I stopped. My body still rocked uncontrollably forward and back, the last notes reverberating into the night.

She said nothing. Just sat there as if she deserved the whole performance.

And I was caught. I wanted to jump up and go inside. But I also wanted to lean toward her. Remember how much you liked that last summer? Do you still? I had to be the biggest fool between here and whatever the hell river ran through Texas.

She sighed, and it broke through the Gabby-cloud in my mind. “What’re you doing out here, Gabby?”

She looked over her shoulder at me, but I couldn’t see her face in the darkness. Just her soft voice floated out. “Why didn’t you play games with everybody?”

I picked idly at the guitar strings. “I’m tired of games. Especially ones I can’t win.”

This Summer Reads Promo was organized by: