A mysterious welcome to the Blog Tour for Stricken. A book about family, about summer, and about a virus that leaves kids without the adults. And there may even be aliens!

For today’s post I got information on the book/author, a guest post with a deleted scene from the book, and lastly I got a giveaway! Yep, this post is filled!

Time to start! Are you ready? Go! 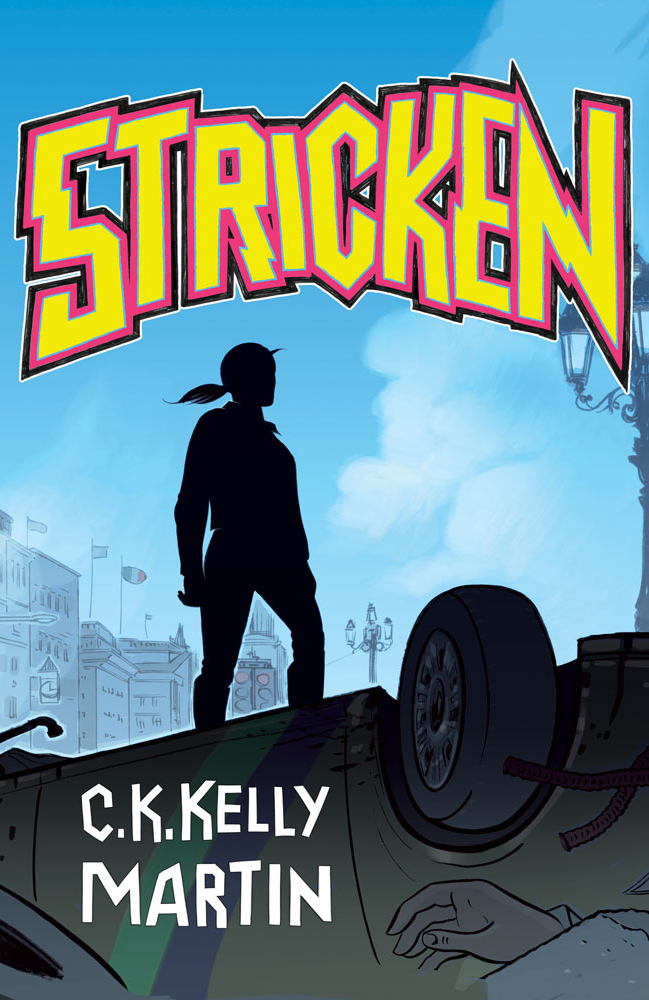 Naomi doesn’t expect anything unusual from her annual family trip to visit her grandparents in Ireland. What she expects is to celebrate her thirteenth birthday, hang out with her friends Ciara and Shehan, and deal with her gran’s Alzheimer’s. What she finds is a country hit by an unexpected virus that rapidly infects the majority of the Irish population over the age of twenty-one.

Amnestic-Delirium Syndrome (ADS) starts off with memory loss, but the virus soon turns its victims aggravated, blank, or violent. Naomi and her friends must survive on their own, without lucid adults, cut off from the rest of the world, until a cure is found.

But there are whispers that ADS is not terrestrial, and soon Naomi and her friends learn the frightening truth: we are not alone.

Buy the book here:Amazon ||| B&N || The Book Depository
About the author:

Long before I was an author I was a fan of books about Winnie the Pooh, Babar, Madeline, Anne Shirley and anything by Judy Blume. Throughout high school my favourite class was English. No surprise, then, that most of my time spent at York University in Toronto was as an English major—not the traditional way to graduate with a B.A. (Hons) in film studies but a fine way to get a general arts education.
After getting my film studies degree I headed for Dublin, Ireland and spent the majority of the nineties there in forgettable jobs meeting unforgettable people and enjoying the buzz. I always believed I’d get around to writing in earnest eventually, and I began writing my first novel in a flat in Dublin and finished it in a Toronto suburb. By then I’d discovered that fiction about young people felt the freshest and most exciting to me. You have most of your life to be an adult but you only grow up once.
Currently residing near Toronto with my Dub husband, I’m an aunt to twenty-one nieces and nephews, and a great-aunt to two great-nephews. I became an Irish citizen in 2001 and continue to visit Dublin as often as I can while working on novels about young people.
My first young adult book, I Know It’s Over, came out with Random House in September 2008, and was followed by One Lonely Degree, The Lighter Side of Life and Death, My Beating Teenage Heart and sci-fi thriller Yesterday. I released Yesterday’s sequel, Tomorrow, in 2013 and put out my first adult novel, Come See About Me, as an ebook in June 2012. My most recent contemporary YA books, The Sweetest Thing You Can Sing and Delicate, were published by Cormorant Books’ Dancing Cat Books imprint in 2014 and 2015.

When Mom gets up she makes more phone calls (to my uncles and Aunt Fiona and Dad) and then we drive to the nearest supermarket and drugstore together. They’re both about halfway down Haverhill Road but it takes lots longer than usual to get there because we have to steer around a series of abandoned cars along the road. Finally it becomes such an obstacle course that we can’t drive any farther and have to park the car in the middle of the street and walk the rest of the way. Mom says everyone else obviously had the same idea about going to the supermarket and stocking up.

“Maybe I should’ve left you at home,” she says as we scurry towards the supermarket, the lines in her forehead deepening. “But we can carry more this way.”

We pass two empty police cars and then two more. I feel a raindrop tap the end of my nose as we spy the police presence around the Tesco.

“What’s going on?” Mom stops to ask one of the officers as we approach.

“Just keeping the peace,” he replies gruffly. “If everyone queues up like they should and obeys the limits on what they can buy, no one will have any problems.”

We have to wait for an hour and half just to get into the supermarket. Every once in awhile one of the cops shouts out from a megaphone, “Everyone will have their turn. Please remain calm and observe the following maximum purchase rules. Again, these rules are to ensure as many people as possible will get what they need.” He goes on to read from a list in his hand, stating how much bread, milk, water, and canned food items each customer can buy.

Because there are two of us Mom and I could technically each buy the maximum amount but we wouldn’t be able to carry it all back to the car and anyway, Mom says we’re just picking stuff up as a precaution. I nod and pretend not to be worried. No one’s jumping ahead in line or getting into fights like they would be in a movie, everyone’s just standing nervously around listening to the cop with the megaphone say the same things over and over.

From time to time I see an old person dazed with ADS stumble by the store but none of the cops try to round any of them up to take them to the hospital. The police mainly ignore them or give the sick people a scary look that anyone, maybe even someone without any memory, would know means don’t bother me.

When we finally get into the store the shelves are already sparse but stock people are filling them as quickly as they can. The customers are faster still. They keep leaping up to snatch packages.

“Stay with me,” my mom says, grabbing my wrist so hard that I wince.

We hurry up and down each of the aisles gathering items in our arms because all the carts and baskets are in use. We pick up water, rice, milk (both regular and powdered), peanut butter, dried pasta, canned vegetables, cereal, several boxes of juice, tuna, disinfectant, batteries and a bandage spool. I don’t know why we need bandages and I don’t ask.

The N95 masks are at the supermarket too because – as one of the cops stationed inside the grocery store tells Mom – the chemist (which means pharmacy) is temporarily closed. The supermarket has opened the boxes the masks come in and are selling the masks separately. We take three – one each for me, Mom and Dad.

I thought only old people needed them but I guess they’re a precaution, like everything else. In line to pay for all our things the man behind us coughs and everyone ahead of us turns to stare.

“It’s just summer allergies,” he says, wiping his mouth with his hand. “I’m not sick.”

The man’s not as young as my mom but not as old as my grandparents either. Sort of in between. “You’re all bloody paranoid,” he grumbles when no one replies. Like everyone else, I turn away from him.

“I SAID you’re all blood paranoid,” he repeats with added volume.

“If you’re that bloody worried about getting bloody sick maybe you
should’ve stayed HOME.”

A young female cop eyes up the man and steps closer to the line, making her presence felt. “Don’t be upsetting people,” she says in a voice that’s almost smiling. “Sure, wouldn’t we all rather be at home than queuing up here?”

The man humors her by jerking his lips into a grin and saying, “I know I would.”

“And you’re one of the lucky ones.” The cop cocks her head to indicate the entrance to the store. “You’re almost finished with your shopping but the queue outside is still growing.”

Just then the sound of a voice amplified by a megaphone peals through store. “For your information there will be another press conference with important details about the ADS virus airing on RTE at two o’clock this afternoon. I repeat, at two o’clock there will be a press conference with important details about ADS.”

Soon it’s our turn at the cash register. We didn’t bring enough cloth bags with us and the store doesn’t have any left so we have to carry some of the stuff to the car in our hands and under our arms.

I have too many cans and drop one in the street almost right away.

There’s an old man passing as it lands with a thud. He picks it up and hands it to me. “Here you go, pet.”

Pet is sort of like honey or dear. In Ireland it’s not a weird thing to say to someone younger, even if you don’t know them.

“Thank you,” I say, looking the man in the eye. He has the clearest blue eyes I’ve ever seen and I can’t help but wonder if he’s sick too. Just not as angry about it as some people.

When we reach the car there are so many parked behind it that I wonder if we’ll have to leave it behind and walk home but Mom unlocks the doors and tells me to get in. Then she steers the car over the curb to get around the rest of them, like she’s a stunt driver. I laugh for the first time today. It just doesn’t feel as though this could actually be happening – all the cars blocking the street, the long line to get into a supermarket crawling with police officers and now Mom acting like she’s in an action movie.