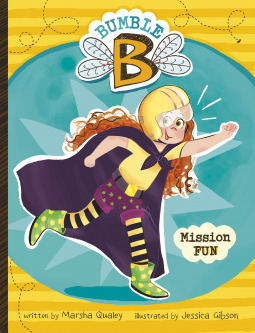 This was just buzztastic! Meet Beatrice “Bumble B.” Flinn, a sweet girl who love bees! She is also a giant klutz. Really, this girl would trip over a fly if it was flying in front of her. 😛

This fun book has 3 stories, Halloween, Science Club, and Farmers’ Market.
In the first one it is time for Halloween (I so wish we had Halloween like this) and Beatrice needs an outfit. But she has a very awesome plan! She isn’t going as a normal bee, or no, she is a superhero. I just adored that she still made a bee outfit, but made it a bit more original than all the other bees. Though maybe her mom should have given her a smaller cape given that the poor thing kept falling face first into the ground or got stuck. I am also happy that she didn’t give up or cried when people made remarks about her outfit. She just stayed strong, did a superhero pose and went on with trick or treating! In the end even her cape came in handy.

The next story is Science Club and that one started off pretty nice, but I felt sorry for Beatrice when she got partnered with 2 other kids instead of her friends. Especially since these two seemed to be quite rude/mean. It took Beatrice a while before they finally got a bit enthusiastic about stuff, and also started to be nice to her. I did like the change in the kids, they weren’t the worst kids, they just needed some kindness. 🙂
I loved what kind of things they found for the club. Simple daily stuff that is easily overlooked.

The last story is about the Farmers’ Market. Beatrice’s parents sell honey at the market and Beatrice is coming with them. She doesn’t mind it at all. This girl is unlike so many of her age group, she loves trying out new foods, helping out her friends. This time she is helping out her friend with making bouquets. It turned out to be quite hilarious as Beatrice bumbled through it (though I can imagine her hand must hurt, I know mine always hurts when elastics get snapped away).
I am not sure if I was all that happy with how they helped out. They played more, forgot about the chores, and also some other stuff. Sure, they are kids, but if you promise to help out do it right. But in the end I could forgive her, she did something very nice for the grandmother.

I guess the illustrations in this book aren’t final? Or is it meant to be half black/white sketches and coloured in illustrations? Either way I did love them. They are so cute and they captured Beatrice and her friends and their adventures so well. Plus I adore the colours used!

Definitely would recommend this one, and I am hoping we will have more stories about Beatrice.