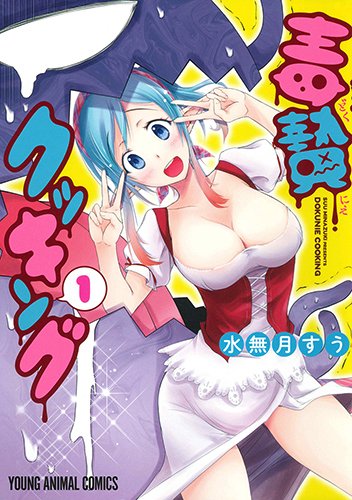 So I was instantly in love with the cover. The girl looked really nice, and I was curious why she was so happily putting herself in the mouth of a monster. And then I started reading and I can tell you I just couldn’t stop reading it, it was just too good. Too much hilarity, deredere situations, food, and of course a cute elf girl.

But let’s start at the beginning, meet Popa, she is the only virgin in the village, and thus, when a monster arrives she becomes the sacrificial lamb. She doesn’t seem to mind it much as she has tons of debts (thanks to her dad) and hopes that with this she can pay them off. I had such a laugh when she eagerly offered herself to the monster and the monster ate and spat her out within seconds. Guess what? Our elf is sexy and sweet, but she has a problem, or actually 2 problems. Namely her feet. They are so smelly, so stinky, the monster even calls them bio weapons at one point, that the monster straight-up refuses to eat her. And that is where the hilarity begins. Because our elf, Popa, is dedicated to be eaten by the monster so we follow her as she tries everything under the sun to get rid of her stinky feet. Sometimes doing things to her own feet (sometimes going way too far), or bribing the monster, or taping herself to a piece of gigantic food. This girl wants to be eaten, and she is getting very frustrated. I was just rolling around laughing at her antics, but also at how sometimes she just didn’t want to do anything any more (which I could relate to, sometimes you just want to curl up and do nothing).

Interestingly, it seems that some form of modern technology is possible in this world. At one point this girl is dedicated to finding out who is doing all sorts of stuff at her home while she sleeps and she promptly is shown to have a HD camera in her hand. 😛 And the monster also has a Famicom, a tv, and we also see them go to restaurants (a spoof of McDonalds). Yes, our monster and elf are going out for food a few times.

We see that Popa isn’t just a cute, sweet, sexy elf though. At several times she shows that she has a very yandere side to herself. Dang that girl is dangerous if you piss her off.

Eventually another character is added to the mix, an angel. She has been send to kill the monster.
When we first saw her I wasn’t sure what to think of her, but now? I am quite liking her.

I adore that the monster is using signs to “talk”. I don’t want to know how he can write them so fast, but I guess having so many tentacles certainly helps. And he is quite the pervert.

All in all, a fabulous, and at times very sexy, manga. I will be rooting for our elf to get eaten. Good luck girl! I can’t wait for the next volume.