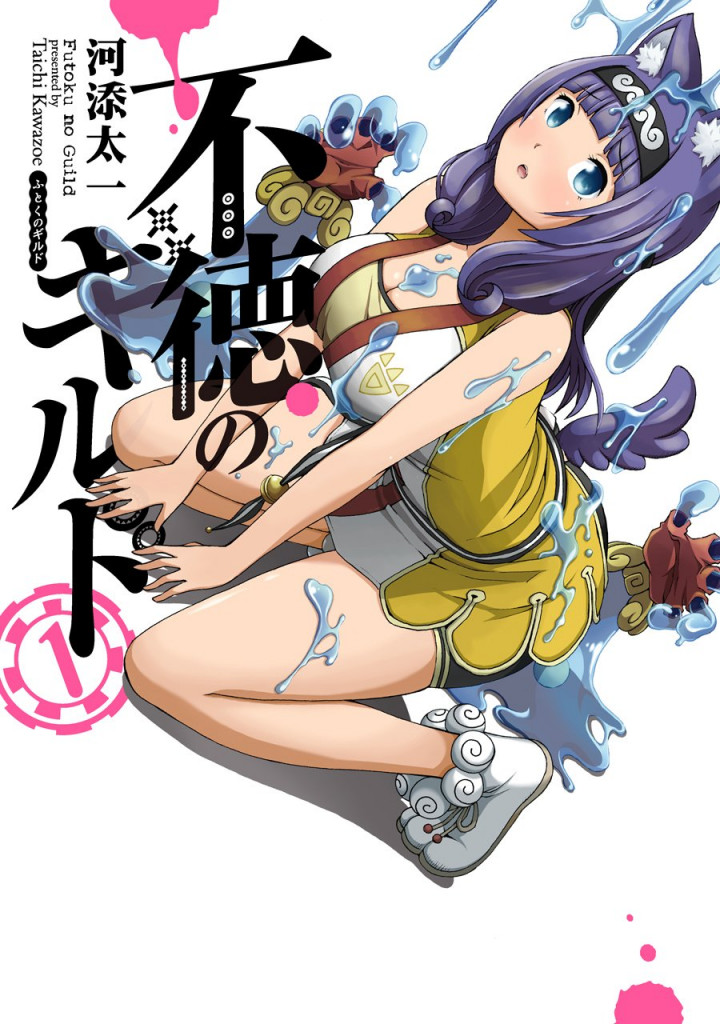 Frankly, I wasn’t sure what to think of this one. There were points that it was pretty OK, but the lewd and ecchi stuff was just WAY over the top. And I have to say that I felt highly uncomfortable reading them. Why did I continue reading this one then? Eh, because the non-lewd stuff was kind of funny, and I just love a good fantasy/RPG-ish manga.

Each chapter brings a new girl with it. We start with a beastgirl named Hitamu. She is a pretty good scout, but she sucks in the rest of the department. How she even was allowed to go anywhere near quests is a wonder to me. The monsters really love her (then again, they love all the girls, but Hitamu seems special). Instead of planning and plotting this girl just goes up to the monster and bows to them (martial arts is her skill, though I haven’t seen her do anything martial artsy). Yup. Stupid move, right?
She is quite the ditz, and for some reason doesn’t seem to learn from mistakes. You would think, given the stuff she goes through, that she would learn and would avoid going headfirst in monster territory, but instead she just goes for it every time.

Medeina Angers, the second girl, and a white mage (aka healer). We don’t see her much, apparently the first time she quested with our MC was enough for her. 😛 And I don’t blame her. But she is still a party member, and we see her have a fun time with the other girls.

Tokishikko Dana, the third girl, and a black mage. She is pretty useless though she is powerful. Her uselessness mostly stems because of her laziness and lack of stamina. She will become a fixed party member and we will see her often on quests. I just feel it is a shame that she can be so kick-ass but is so terrible at things. I would have loved to see her kick some butt.

Hanabata Nokinsu, the fourth girl, and a warrior. Yep. Do we finally have a girl who can handle herself? Well… a bit. Just don’t talk about her special power, which had me in complete stitches. I definitely didn’t expect that. I am not too sure about her design. Did she really need to have such big boobs?

Enome, the receptionist of the guild. She also plays a role and not even a tiny one as we see her every chapter, and in chapter 6 she even comes with our party to see what is going on with the animals. I wonder why she kept assigning girls to Kikuru when she could clearly see that the girls were ragged and quite traumatised each time they came back.

Then there is the guy who is the leader in the group, Kikuru. I am not too sure what to make of this guy. He is cocky, annoying, and oh hey, my members are being molested… let me just watch. Um. What? Why are you just standing by idly and not doing a crap thing? We all know he is awesome, we see him handle himself without the need of help, yet it seems when he needs to help someone else he can’t do it or takes ages.
He wants to retire. Not only because he feels like he is wasting his youth, but also because one of his friends is getting married. Sadly, it seems that for now he is stuck as these girls can’t seem to learn how to fight. And someone needs to defend the town other than the guards.

I am curious about this world, we do get some idea on how the world works, but mostly it is one big mystery, and that is a shame.

The art is pretty great. I mostly like the designs on the girls (though the boobs, especially on Enome and Hanabata, are just overkill). The monsters are nicely draw (especially loving those slimes).

All in all, a bit too lewd and ecchi for me, and I just felt uncomfortable. The girls are getting molested on a daily basis, and I am sorry, it is just not for me. And with chapter 6 it just exploded. It was already pretty WTF, but that? That was just so so so too much. I am not sure if I will continue, probably not. Even if I am curious if the girls will ever get better, and if Kikuru will get to retire, I just don’t want to see more lewdness.