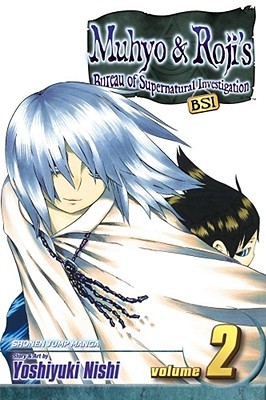 The second volume, less ghosts per chapter, and much more story and information on the world, the Magic Association, and Muhyo and Rouji’s relationship intensifies as certain things are learned.

So, I just had to keep on reading. I had to do some stuff first, but then I read and read and read. Because dang it is just too good. Sure, I was a bit surprised when we went from monster/ghost per chapter to a 2 chapter ghost arc, followed by a 1 chapter ghost, and then to a ton of chapters arc about the Magical Association, Muhyo’s past, why he chose Rouji, Muhyo’s nemesis, tons of creepiness, a pervert dude, and more. But once I was settled in for that arc, I didn’t want it to end.

Let’s start with the normal ghost stories. The first two chapters introduce us to a new character, Nana who is introduced to our duo by the brat from the previous volume, Kenji. Nana is a girl who loves taking photographs but has noticed there are ghosts in it. Are they real, or are they fake? The story was creepy, but also broke my heart. Poor girl.
We also find out that if Muhyo gives out the wrong punishment, the punishment will in a way come back to him. Which is an interesting thing, and I am kind of happy it is added, this way executors really have to think on the punishment and not send the ghost the wrong way (as again, not every ghost is a baddie). After a tears inducing ending, it seems that Nana is here to stay. I am not too sure if I like it though. She is quite an interesting character, but I don’t know. I just feel it is too soon to introduce an important/main-ish character. But we will see if she stays.

The second ghost is a creepy one, and I have to say I was a bit pissed at Rouji. I do understand his feelings though. He has been with Muhyo for quite a bit of time, at least that is how it feels to me, but Muhyo makes remarks all the time. Not kind ones, but ones that would make even the strongest person feel shitty about themselves. Still I hope he learns a lesson from this one. You need to train more, don’t let your emotions overpower you as you will endanger those around you.

Then there is the Magical Association arc. I had a laugh that Nana just followed our duo through the portal. Oh hey, a creepy portal? Let me just go through it. Oh Nana.
I loved seeing the Magical Assocation, it looks like a cold place filled with magic. But all is not as it seems. We will quickly see that there is more than just a test about to happen. Muhyo’s nemesis makes an entrance. We get a whole backstory, including tons of insanity, creepiness, and eardrums shattering monsters. Lovely.

I am so happy that we finally find out more about Muhyo, about his friends Yoichi and Enchyu (though the latter went insane). Even back then Muhyo was lazy. shakes her head But he was talented and eventually it seemed he studied.
I am a bit angry that Muhyo never told Rouji about anything. I get that maybe he was waiting for the right time, but given the many things that happened, and the many arguments, I think the time has already passed. He should have told Rouji sooner.

Rouji has much to learn, but I am happy that we see that he has the power, that he has the ability to be a great magician/judge. He just needs to learn to not be overly emotional, trust his boss a bit more, and study something more difficult than those kiddie books.

The art is still not always my fav, but I will stick to what I said about it in my previous review, it does fit with the story, the creepiness.

Since I want to pace myself I got to wait for a bit before I read further. My plan is to read 2 volumes each month. That way I got something to look forward to. Plus the anime is coming soon, so I got that to fill my time as well.