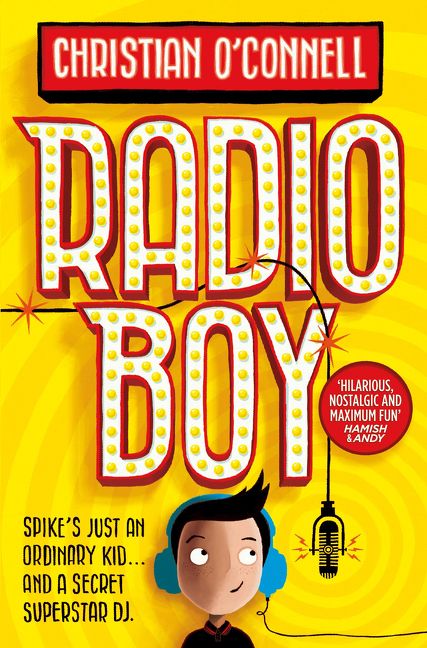 “No, this pretty ordinary superhero was just a kid with one special power. He was great at radio. He was Radio Boy.”

I already tried this one a bit earlier, so I was delighted that one of my libraries had it so I could continue it in physical book form (my preferred way of reading). I had to figure out where I left off the last time, but after that I couldn’t stop reading. It was just so much fun to read this one.

Ah, given the blurb it may seem that Spike starts with his show due to him being fired, but it is actually something else that sets it all off. I won’t spoil it, you will just have to read the book to see what the catalyst is that started everything.

I liked Spike from the start, though I liked him less as the story went on. Don’t get me wrong, his vendetta with the headmaster was awesome and I was rooting for him in the beginning, but then he just went way and way too far with it. And it took him way too long to realise it himself.
But he sure knows how to DJ and how to attract a crowd. Sure, he needs help from his friends to do all the other things, but he is the one that knows how to draw people to the radio and to stay listening. He has all sorts of amazing plans and ideas and I love that he can do it all impromptu, no script, no rehearsal. Whatever just pops into his mind.

The show was definitely fun, well at least in the beginning. At times they went a bit too far, but there were various times I was just having so much fun reading about the show. Like when they added words to the homework, or when they talked about lies that parents told them. Artie finding all the right songs for the right moments was just amazing. I don’t even want to know how he knew exactly what to play during those moments, since nothing was rehearsed. Plus they even thought of changing their voices so that people wouldn’t immediately recognise them. I have to say, given the reputation of the inventor, I had expected that thing to either explode or stop working in the midst of a show. 😛

I thought their show name was just hilarious. Oh, hey we are having a SECRET radio show, let’s just tell people it is aired from a shed, and then also tell them you are in x school. Yup, it surprises me no one found out immediately.

His friends, Artie and Holly, were terrific characters. I have to say out of the two Holly was my favourite. I just like girls who are kick-ass and can do all sorts of amazing skills. Though Artie also gets points for being able to find the right song instantly.

Hilariously, and this will be going under spoiler tags.

The headmaster was delightfully evil. Yes, I say delightful, as the author really wrote him and his evilness really well. I just love it when baddies are written well. His kid was also written well as bully. You were just rooting for the good guys to be victorious (though again, sometimes they went a bit too far with things).

The mom was a bit too helicopter parent for my liking. I can imagine that both the dad and Spike did those sneaky things. I would have done that too if my mom was like that. I can see she means well, but I do hope that she is able to let her kids go a bit more. Also, asking if they went to the toilet when your kid is the age Spike is? No. Just no. I did think it was weird that she didn’t know what the word was for people who listen to a radio.

The book also has illustrations and I quite liked them. They made the book pop out and more fun.

All in all, I do need the second book of this series, I need to see what happens in that one, though I hope the granddad character isn’t too annoying.
And lastly, to end this review, I would highly recommend this one if you want to see a kid who makes his own radio show and totally rocks it.