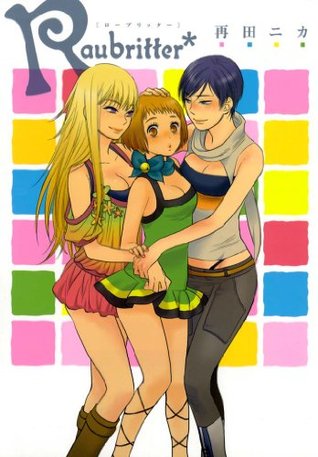 A so-so manga with some sexy yuri scenes and mystery.

I say so-so as I expected a bit more. It looked really adorable, and the blurb also made it seem like a very interesting read. However… it just was a tad boring + I am not a big fan of the MC’s design (she is clearly in college but looks not a day over 15 years old).

Meet our MC, Neneko, her sister, Nanako (yes, really), has been missing for some time, so our girl is now looking for someone to help her find her sister. And she comes to the address of Raubritter, which consists of two cousins, Shinobu and Yokana. These two will help her find Neneko’s sister. But of course, solving the mystery isn’t the only thing they do, oh no, they also like girls and Neneko is a girl they like. 🙂

I was at first worried this would be a love triangle, especially given one very sexy scene in the first arc fans herself, but thankfully I quickly saw that it would be mostly Yokana and Neneko getting together and getting closer. Which delighted me as they fitted together oh so well. Neneko is all soft and cute, and Yokana was all mature (but also a bit hyper). I loved their scenes together.

I was a bit worried about Shinobu, as I didn’t want to see her end up alone, but thankfully the second arc (the last two chapters) of this volume a love interest appears. I wasn’t all too happy with Shinobu’s decisions on how she treated Torako, but later on she explains why she did what she did. I was very happy she talked it out. And no, I won’t tell you if Torako decided to stay with Shinobu or not. 😛

I liked the conclusion to the mystery of the missing sister, boy, oh boy, I certainly hadn’t expected that ending. But it was a fabulous one. Though I don’t get why she didn’t contact her sister earlier? I mean, apparently you have been gone quite some time, you are the only family your sister still has. And you have been living together. It seems odd and mean.

The art was just wonderful, the character designs were just so so pretty. And the sexy scenes were drawn very sexy, not to graphic, but just right enough.

But yeah, I cannot rate this very high as it was a bit boring at times. The story was a bit messy as well and some things just seemed odd. But I still had a good time reading it, mostly because of the romance, the character designs, and the mystery. Plus there was a dash of humour which I also liked.