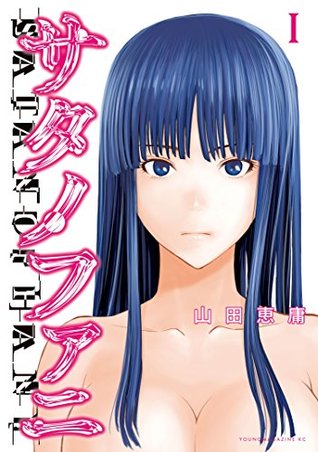 A manga with potential, but hell to the nope that I am going to read this one further. Warning: Graphic rape scenes. Lots of gore.

So the potential was there. There is something going on that changes sweet and lovely girls into bloody killing machines. Not caring or knowing what they do during those moments. They commit the most heinous crimes. How they get the syndrome? Is it curable? Why now (as there is a sudden influx of girls going bonkers)? So many questions!

We follow one of the girls, Chika Amagi. A girl who committed brutal murder of 5 people, 2 she thought were her friends but just sold her to 3 guys who want to rape her. Yuuuuuuppp. Nice friends, right? She ends up in a special prison with several other girls who have the syndrome. But the prison isn’t just a fun tea time and let’s think about our sins place. Oh no, it is actually much more than that. There are things going on at night, things that will make you want to lock your door and pray they can’t break doors.

But I am just not going to continue this one. First of all my food wants to leave my stomach (so much gore and it only gets worse), second the rape scene was just horrifying (and sadly I couldn’t skip it fast enough), third I thought maybe chapter 7 would be better, but oh no, more rape. And graphic in details as well. Sorry, but no thank you.

Plus is it needed to have boobs boobs and ass all over? To have the girls wear bikinis and at times barely anything (in the chapter images). I don’t mind some fanservice, but this was too much. And it just didn’t feel like it fitted. Like the mangaka just added it to make it a bit juicer and enticing for people. Even the tiny girl had boobs. Everyone had boobs. And not normal sized, oh no, just big sized (though thankfully not Eiken sized, because I would probably just have laughed then).

So it does have potential, the idea is interesting, and I am curious about the prison (whose plan was it to put them there, and what do they want to achieve). Maybe one day this one will be finished and I will just read spoilers online. 😛 Because I am not touching this one any more.

One thought on “Review for Satanofani Vol.1”