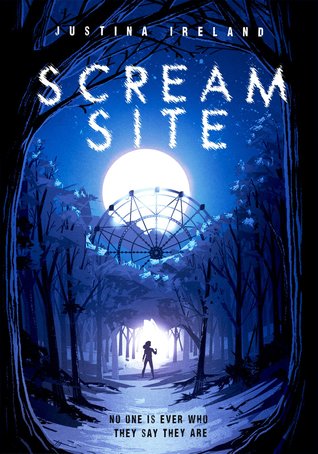 Good grief, this was just absolute boring and urghghghhh. I had the hardest time staying awake and getting through this book. I kept hoping and praying that it would get better, but oh no it didn’t. If anything it got more hilarious as the ending got closer, and boy it was anti-climatic as hell.

So, let’s start with the blurb, aka who the hell wrote this?
Sabrina Sebastian’s goal in life is to be an investigative reporter. True
For her first big story, she researches a popular website called Scream Site, where people post scary videos and compete for the most “screams.” Semi-true, actually she is doing it for an internship. She has written numerous stories already, and is now looking for something that will entice the boss of that paper for an internship.
While Sabrina’s friends and her sister, Faith, talk nonstop about the creepy viral videos, Sabrina just hopes that covering this trend will get her the internship she’s wishing for. Wrong. Sabrina has only one friend and she doesn’t care that much about the site, she only knows about it from an article (and that article spurred Sabrina to investigate). Her sister did watch the videos, and also later uploads one, but to say she talks about it? No.
But as she digs into the truth behind the website, she begins to suspect that these aren’t only aspiring actors and videographers at work. Some clips seem a little too real. Actually she knows this from the start. When she first checks out the videos.
And when Faith goes missing, Sabrina must race against time to save her sister from becoming the next video “star.” Hahaahahahahaha, you know this doesn’t happen until page 223, aka almost 85%? Yep, SPOILER ALERT.

Now we have that blurb out of the way, the blurb that enticed me to read this book, let’s go to the book.

Say hello to Sabrina, a girl dedicated to becoming a great writer. To win an internship she has to write a big article, and she chooses a site called the Scream Site. There are various exciting rumours floating around about the site, ranging from murder to stalkers. As she continues investigating (and sticking her nose where it doesn’t belong) she gets further and further entangled. Not to say it was very exciting, as this girl just keeps on going on and on about the same things. She is pretty gung-ho about Asher (such a rookie mistake to just keep one suspect), even though I thought Asher was pretty cute and sweet and he really didn’t scream KILLER or KIDNAPPER.
Plus I loved how she didn’t care that people warned her that it may be a bad idea to actually do this, and how it took her to page 204 before she realised that maybe this is a bad idea. Then again, she turns around instantly a few pages later and just goes right ahead to investigate.
She also makes various other mistakes that could have gotten her into real danger..

Sure it was admirable that this girl kept on going and was dedicated to find those missing girls, but sometimes you just have to let it go, especially if you are 14 years old.

But you can also see what happens when the police don’t take you seriously (then again, that is to be expected, it is something so cliche). But I guess I would also be a bit hesitant to believe a 14-year old girl who just comes with some random evidence. But as I said, we later on see what happens due to this lack of faith.
Oh, and don’t worry

Also given that Asher knew Sabrina’s name, I was actually hoping for something blooming between them.

The ending was highly anti-climatic. Like really, I wasn’t sure if I should be laughing, rolling around laughing, rolling my eyes, or fall asleep. Maybe I could do a mixture of it. Boy, I had expected some tension, some excitement, but instead I guess I could have expected given how sleepy/bland the whole book was.

I had a laugh at Evelyn when she tried to get her friend to stop investigating. First she talks about safety, and the next moment she talks about how Sabrina would get unpopular due to this. This girl needs to set her priorities straight.

There are a few moments of tension, but they quickly die away, and frankly I was done with this book on page 50, and at page 101 I was wondering how the hell I should continue this book.

Plus these, Sabrina says that her dad was very convincing on the whole: “You should be wary of who you chat with/and be careful on the internet.” Yet Sabrina’s sister just hooks up with some dude on the internet. And yes, I believe she may have known him, but really, I can also tell someone on the internet that I am x or y, it is so easy. So I was kind of rolling my eyes that she would be that stupid.

This could have been so exciting, this had all the potential (based on the blurb) for a terrific, exciting, creepy book. Amusement parks (especially abandoned ones) make for a terrific horror scene. Add to the mix kidnapping and maybe murder and it is perfection. Sad to see those terrific settings and subjects go to waste in this book.

NOT recommended. Not at all. I would kindly ask to have this book renamed to Yawn Site. And I am sure I could point out a few more things, but frankly I want to delete this book and get on with another, hopefully better, book.