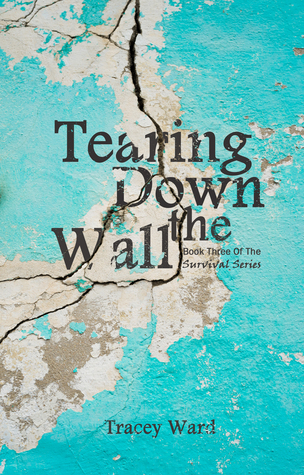 The final book in this the Survival series, and DANG it was just way too awesome.

It is time for the final battle, but first Cannibals time! The last one we still needed to meet. The one we heard so much about, mostly in hushed and scared tones. I am glad the author took her time to introduce us to the cannibals, and also told their story. How they became cannibals, why they live underground, and how the cannibalism works for them. I was quite surprised when we found out how they are cannibals, it was totally different from what I had expected (mostly thanks to the stories). I still don’t approve of anyone eating anyone, especially not in a zombie apocalypse, but I have a bit more understanding for them.

I am happy that finally someone was willing to help our trio out. I was getting a bit disheartened by the rejection from the other groups.

Of course with the colonies going down we also meet Vin again. I was surprised at what happened while Joss was away, I keep forgetting that it took them very long to finally initiate the plans to free the colony. At those times it would be handy if there was still something like cellphones or computers. Now there was just no way to communicate and thus what we find when our group gets back to the colony was surprising.

The battle for the colonies, to defeat Westbrook for once and for all, was all very very exciting. I already couldn’t stop reading but at those points I just noticed I really didn’t want anything to disturb me while reading. It never felt rushed or hurried. Everything was carefully planned, everything was carefully done. Everyone had a purpose in this plan.

I am happy that the Vashons helped out. More Ali is always good in my book. I am glad that Sam finally told (even if it took way too long) our trio why he was protecting Ali (or I should say protecting her and everyone around her).

I have to say my annoyance at Joss grew with this book. Don’t get me wrong, she is a wonderful, kick-ass, zombies be damned girl, but she has some issues and I really wanted to shake her around and show her it isn’t only about her. This is about a greater thing, this is for all of Seattle. Instead our girl keeps complaining and opening her mouth at any inappropriate moments when all she should do is follow the damned plan for once. Plus, while I can understand, this is really not to go on and on about guys trying to protect you. They know you can handle yourself, but they LOVE you, they care about you, they want to keep you safe. You should be happy that someone cares about you in this dead and doomed land.
She is so tactless as well. For instance, I could understand her point on the cannibals, but I was definitely unhappy how she opened her mouth while she was there. You need these people. You need every men and women to fight. You can’t just dismiss them and be disgusted with them.


Trent knowing many things got a tiny bit on my nerves. Especially since he felt the need to rub that in with Joss. Guy, please. You were freaking 14 when the world ended, she was 8. I am glad that Joss stays herself and also states that she doesn’t feel the need to learn why things are x way. Rain falls out of the sky for some scientific reason? Shrug. It gives me water, it gives life, she doesn’t care how it happens as long as it happens. 😛

Ryan and Joss’ relationship is still written pretty nicely. I have to mention this again, but I am happy that the author took her time. She didn’t rush it. She let both characters get closer at a relaxed speed, showing the bumps and holes in the road, letting them discover their feelings. A big thumbs up to this. Thank you.

As with the previous books, we find out more about what happened to Joss in those first days, and my gosh, my heart just broke. It is no wonder she is broken, that she has such trust issues.

I am definitely happy with how the book ended, it was a sweet note to end it with. Plus everything that had to be resolved (the battle, the fights, getting freedom) is now resolved. Of course, there is always room for more books, but I think Joss and Ryan’s story is over. They have fought their battles, found each other, found love, and they can retire now and enjoy their time together, of course still fighting the zombies (a never ending battle).

All in all, I would highly recommend this series to everyone. Be sure to also read Quarantined.