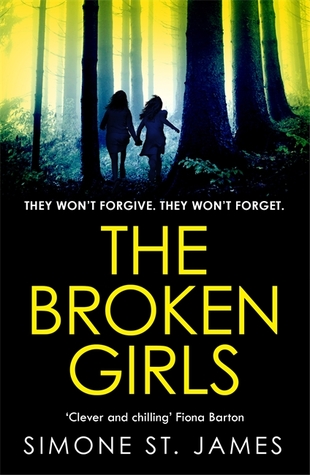 I am so glad I found this book, it isn’t always easy to find a good horror/thriller book, but this one was just fabulous. It has a paranormal element to it (Mary Hand) which I absolutely loved as it connected both the stories, both the things that happened in 1950 and 1994.

The book is split up in two timelines, 1950 and 2014. 1950 takes place on Idlewild Hall, a boarding school located in the town that our MC from 2014 lives in. It features 4 girls, 4 friends. Sonia, Katie, CeCe, and Roberta. The POV switches with each time we go back to 1950. I have to say I didn’t mind as we got closer to the girls, saw their friendship, saw their pasts. And dang, those girls have some pasts. I won’t spoil anything, but be prepared. Alongside of this there is the ghost of Mary Hand. Yep. A ghost that haunts the school and is in fact very cruel. If you encounter her she may show you one of your fears, something that happened in the past, or tease and bully you with songs, scratching, and other creepy stuff.
The 1950 parts were always my favourite. They got better with each chapter, each time we found out more about these girls. I loved all 4 the girls, with my fav being Katie.

The 2014 POV is Fiona. A woman, a journalist. She lost her sister 20 years ago when she was murdered. This affects her even to this day in a way that goes very very far. When she finds out that Idlewild Hall is sold and being renovated she sets out to find out more about the place, but also about her sister’s murder, and then later when something is found at the school, also finding out about that.
I have to say that at first I wasn’t that interested in the 2014 parts. But after a while I started to get more and more invested in it, and I just adored Fiona more and more. Sure, she had her flaws. For instant I did think that at times she was just going way too far with things. I understand that her sister was murdered and that this was an event that changed her life, but she was just way too obsessed with it even to the point she could barely have a relationship with people.
But she was also awesome that she never stopped. She was dedicated to getting the whole story. She was dedicated to finding people who had something to do with it. She wanted to get everything right, and fix things. Make sure no more people are harmed or can be harmed.

As the story unfolds we find out more about what happened to Sonia, but also more about the murder on Deb (Fiona’s sister).

I adored that the author kept the who is Margaret Eden secret until the end. Of course I was guessing who it possibly could be, but I hadn’t expected that, and then I was even searching through the book to see if I missed something or if the author just casually dropped a certain thing in the text. It was the latter.
And with revelation all the missing pieces clicked together.


The story gets more and more disturbing and creepy and OMG as we find more and more about Sonia (what is going on with her, what happened to her before she got to Idlewild Hall), but also about Deb and how deep the roots of that went into this little town.

In the 2014 parts we also have some romance and some not-graphic almost sex scenes. I had no problems with those, I actually quite like them as the 2014 story is also about Fiona finding rest and peace, about her settling, finding someone she can love and who will love her. It is time to let go, and I loved that she tried to let someone in her life. Even if it wasn’t easy. Not only because of the Deb situation, but also because she is journalist and her boyfriend is a cop.

I will put this one under spoiler tags, it isn’t technically a big spoiler, but I still want people to find it out for themselves.

Of course there is enough paranormal stuff happening with Mary Hand, but also something other things that gave me a big case of goosebumps (plus it didn’t help that I read part of this book before I went to bed :P).

The ending was just perfection, and yes, I cried at a few points. It was just too good. It made me happy for everyone.

I could probably write a longer review, but dang it is hot in here and I already wrote a few reviews today. So I will end it here and just recommend this book to everyone. Be sure to check this book out if you are in the mood for a thriller with a paranormal element with great characters.