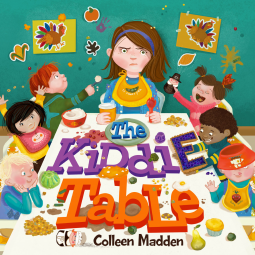 So we don’t have Thanksgiving where I live, but I still couldn’t resist this book. That cover just looked hilarious and I wanted to know the story behind that chaos.

Our MC is sat at the kiddie table during Thanksgiving, and she is not having any of it! She is already old enough to do all sorts of things, and she doesn’t need a sippy cup! To make matters worse the other kids (way tinier) are making a mess. The girl can’t take it and explodes!

I just had such a laugh when she suddenly stood up and starting holding that speech. Not only because of how silly it looked, and how she was doing the same as the tinier kids (shout/scream/etc.), but also because the speech (and all the book) was in rhyme. Sorry, I just cannot take that serious. 😛

Thankfully her speech is heard by the adults. I did like how the parents handled it. Not only by allowing that, but also telling her that shouting is not good and asking is preferable.

I didn’t understand why the parents gave her a sippy cup/kid-proof cutlery in the first part. I get that she was sat at the table with kids, but come on. It just felt like they were making fun of her. 😐

The ending was pretty cute, and I am happy for her. Though I do hope that next time the parents make room for her.

All in all though I did like this rhyming book about Thanksgiving!