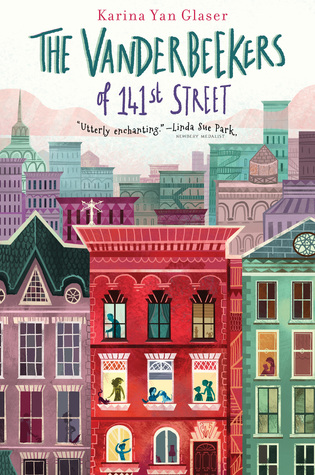 I am just not sure what to think of this one….

The premise sounds pretty sweet, heartwarming and lovely, but I actually didn’t like it that much. Maybe because I got tired of the “Old man yells at clouds (or in this case kids and adults), but turns out to have a terrible backstory with lots of tragedy and that is why we should all forgive him for his angry outbursts because look at this sad old man”-trope. Really, can’t we for once just have a grumpy old man without a sob sob backstory? Like he is just legit pissed off at the world for no reason? He just hates things? And I wouldn’t mind if he would grant them one kind thing, but then turns back to crabby. But this? I have seen it too many times in books (or movies, or tv-shows, or anime, or manga).

It also didn’t help that the POV switched between the various siblings. I didn’t always like the siblings. Oliver for instance was definitely not my favourite. Laney or Hyacinth would both win. Laney for her weirdness that is kind of adorable, Hyacinth for the amount of love she can throw out in the world and that she doesn’t care if someone is an angry humbug, she will just hug them to death and let them feel the love. Isa and Jessie were OK-ish, but then the whole drama with Bennie started and I just raised my hands to the heavens. Was that needed? And what in all hell did Jessie think that it was a good idea to lie about that and say that? Hello, your twin, Isa, is allowed a life outside of your precious twinbubble. I get that it is hard, but growing up means that you can’t do everything together every day, every hour.

I did find it weird that someone is just able to drop someone’s lease like that and barely gives them time to find a new home/move. Unless the parents knew about it for months and just didn’t care to tell their kids until right before Christmas (which seems like a crappy thing to do), but otherwise I don’t see how it is legal to just drop someone’s lease and just give them a week (maybe a bit more) to get out.

I am bit confused about the cover. We see 3 stories of the house, I am guessing the last story (bottom level) is hidden. But, checking the cover we see the kids on the third story, whereas that is the apartment/floor of their neighbours: Miss Josie and Mr. Jeet.

As reading the book linear didn’t work for me (in very very rare cases that happens), I dove right to the end, then pick random parts to read until I finish the whole book. It is a bit chaotic, but it isn’t like I missed anything of the story this way or got too many spoilers. That may also say something about the book itself. 😛 Too predictable.

I did like that the book took place over the days until Christmas. Then again, I didn’t notice much of it given how I read the book, but still nice touch.

There are a few illustrations (like 4 or 5), mostly stuff like how their house looked, or a note. I would have loved seeing the characters, or some other things. Now it just felt weird there were things like that water wall thing, or a note, but nothing else.

All in all, not a success. I am a bit sad as I have been hoping to read this book for some time and I was delighted that one of my libraries finally had it.