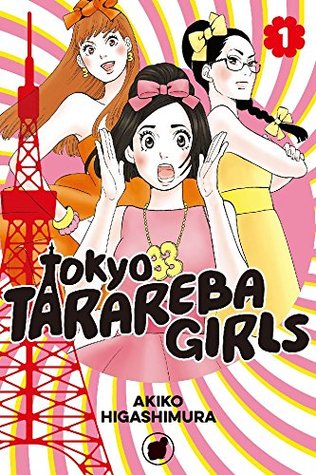 Wow, this was just so shitty that I wish I hadn’t laid my eyes on it. I adore Akiko Higashimura’s other manga: Princess Jellyfish (I should really get the rest of the volumes as I am super behind). I was kind of hoping that this one would be just as fun, just as wow. I was delighted when I spotted it on Netgalley as I have been hoping to read it for some time now.

Sorry if this review is a bit chaotic, I am really raging and fuming about all the crap. 😐

However this was just the worst. Rinko? Terrible terrible character. All she and her friends do is drink through the night, complain about all the things (mostly men and sometimes work), make fun of things, whine, whine and whine. Oh and drink. Drink until fucking oblivion when Rinko sees talking food. Then again, maybe she doesn’t necessarily need to be drunk for that, instead just be herself. That talking stuff was really not helping the terribleness of the manga.
And whine she does. Oh boohoo, I need to find a husband, because it is totally not normal to be 30 and single/not married. /sarcasm rolls her eyes But instead of actually doing an effort to find a cute guy she constantly drinks (funnily, apparently her friends have various forms of alarms, it is that the author added that the manga as clarification, otherwise I would have thought that there was only the fourth alarm until about 113 pages in when we finally get another alarm kind, but which also means drink drink drink until death). And no, I am not against drinking, but every night? Just because you had a shitty day? Which is apparently all of the days given that I don’t really get a clear image on how the days go by. Alcoholism ahoy?

I am sure if she actually did a bit of an effort, maybe went to other places than karaoke or the pub, and maybe act a little less over the top dumb (and drunk), she could easily find a good guy. She is strong-willed, looks cute/nice, is smart. I know that there is a Rinko there, under all the stupidity and idiocy, who is a good girl, and who could easily get a ton of cute guys. And maybe she should gain some confidence because she bases her No one wants me on two guys and oh yes, that one party she went to. Girl, please, do you really think that you will find your dream guy that fast? There are tons of fish in the ocean, and unless you have actually tried more of them I don’t want to hear you whine about it. Plus she keeps going on and on about how she can’t find a guy. Gee, did you even try?

There is one time that they actually make an effort, but I will give you one guess on what happened. snorts

Then there is Key. An asshole. Truly. He instantly judges the ladies when he comes across them in the bar, calls them names, and also makes some very judgemental opinions known. Not to mention that when Rinko has to add him to the tv show she wrote, he acts like a total jackass. Telling her that her writing is boring. Sure, he does show he cares… somewhere… but sorry, I just wouldn’t want him and Rinko getting together.

Then there is that time the girls called all Japanese men pedo, especially hinting at Hayasaka-san falling for someone who is a fucking adult, but 12/13 years younger than him. What the actual hell? And they keep going on and on about it. Such hypocrisy, because I know for sure that if they had a chance? They would take it with a 19 year old guy. <spoiler>And lo and behold, Rinko went for it with Key… but I am sure she won’t be calling herself a pedo, oh no. </spoiler>

Oh, and who the hell buys a 500 euro dress. o.0 I am sure guys are also happy with cheaper clothes, they probably won’t even notice. 😛

But the art was pretty fabulous, so at least this wasn’t a total loss. Too bad about the rest though.
I am not going to read this series further. Bah. I need some werewolf romance to get rid of the bad taste this one left.