Welcome to the Blog Tour to Lawrence M. Schoen’s newest book, and second in the Barsk series, The Moons of Barsk. I was more than delighted that I had a chance to sign up, I am sad I can’t read/review it (due to my vacation), but at least I can still promote!

So for today’s post I got information on the book + the author, but I also got an excerpt and a giveaway!

Let’s get started on this tour. 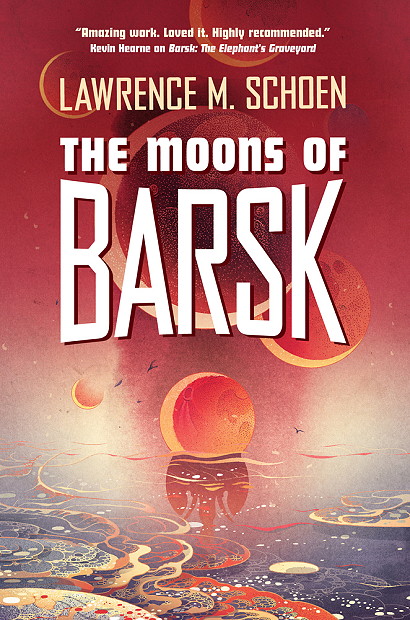 Years after the events of Barsk: The Elephants’ Graveyard, the lonely young outcast and physically-challenged Fant, Pizlo, is now a teenager. He still believes he hears voices from the planet’s moons, imparting secret knowledge to him alone. And so embarks on a dangerous voyage to learn the truth behind the messages. His quest will catapult him offworld for second time is his short life, and reveal things the galaxy isn’t yet ready to know.

Elsewhere, Barsk’s Senator Jorl, who can speak with the dead, navigates galactic politics as Barsk’s unwelcome representative, and digs even deeper into the past than ever before to discover new truths of his own. 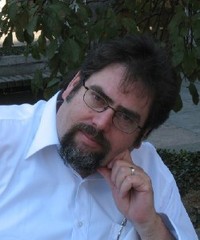 Lawrence M. Schoen holds a Ph.D. in cognitive psychology and psycholinguistics. He spent ten years as a college professor, doing research in the areas of human memory and language. This was followed by seventeen years as the director of research for a medical center in Philadelphia that provided mental health and addiction services. Evidence from both these career paths can be found in almost everything he writes.
He’s also one of the world’s foremost authorities on the Klingon language, and since 1992 has championed the exploration and use of this constructed tongue and lectured throughout the world. In addition, he’s the publisher behind a speculative fiction small press, Paper Golem, aimed at showcasing up-and-coming new writers as well as providing a market for novellas. And too, he performs occasionally as a hypnotherapist specializing in authors’ issues.
In 2007, he was a finalist for the John W. Campbell Award for Best New Writer. He received a Hugo Award nomination for Best Short Story in 2010 and Nebula Award nominations for Best Novella in 2013, 2014, 2015, and 2018, and for Best Novel in 2016. He’s received the Kevin O’Donnell Jr. Service to SFWA Award as well as the Coyotl Award for Best Novel. Some of his most popular writing deals with the ongoing humorous adventures of a space-faring stage hypnotist named the Amazing Conroy and his animal companion Reggie, an alien buffalito that can eat anything and farts oxygen. More serious writing can be found in his BARSK series, which uses anthropomorphic SF to explore ideas of prophecy, intolerance, political betrayal, speaking to the dead, predestination, and free will.
Lawrence lives near Philadelphia with his wife, Valerie, who is neither a psychologist nor a Klingon speaker.

His ears dropped at the wonder of it, questions of math falling away for the moment. She wore a simple dress of pale brown with a slightly darker vest over it, both clung to her body as the rain soaked them. As she drew closer, he caught a faint floral scent, a perfume that had been popular decades ago. Her eyes locked on his face, her arms opened wide in greeting. The simple familiarity of the ritual provided a touchstone and he shook off his confusion, stammering the traditional reply as he had at other introductions, thousands of times over too many decades.

“Perhaps our mothers knew one another.” The absurdity of his words hit him. Knew one another? It would require a Speaker, assuming one could be found who was old enough to have known either an Eleph named Layne or his own mother before they had sailed away and arrived here themselves. The framing of that puzzle brought the impossibility of the math back to his mind, now compounded.

This was the final island. No one lived here. Each Fant sought it some few days after awaking to the knowledge that their death lay at hand and then strove to arrive on its shores. Nothing of the living world belonged here, least of all a … hostess.

Ryne sucked air hard as his mind raced with probability functions. Assuming the island’s perimeter contained an average span of usable beaches for bringing a boat to shore, arriving on the same day as another Dying Fant had better odds than the annual archipelago lottery. But this Bernath, she had called him by name, spoken of his home, and that unlikelihood exceeded all the stars beyond the clouded sky. He gawked at her as the words fell from his mouth. “You … you know me?”

“I feel as though I do, though I know we’ve never actually met. But in time, you and I will come to know one another far better. In time, I hope you’ll entertain some questions I have, questions about magnetic optics and the dynamics of charged particles on electromagnetic fields.”

His ears flapped back and down as he lowered the odds of his initial estimate, taking into account the thousands of students he’d had over a lifetime spent in academia, the many papers he’d presented and published. Even so, the math was still impossible. Cut the nearly infinite in half and one still had half an infinity. And yet the Eleph woman’s questions reflected some of his most recent work and unpublished theories, research that had never been a part of his classroom, calling into doubt his calculations once more. “You know my work?”