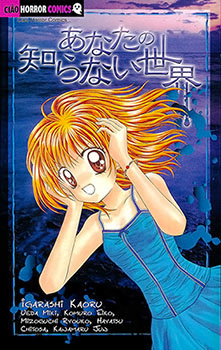 A short story collection featuring 6 stories about supernatural or evil things lurking in our world.

I will be writing a short review per story + give it a rating.

Man, Natsuki is an annoying little brat. A bully. A meanie. First bullying Kirishima, then bumping into an old lady and not saying sorry (though sure, she did help out by bringing that old lady’s stuff up to the temple), and then stealing that bracelet. Gee, girl… And duh, of course that thing is haunted, I was already noping from the moment she took it and that old lady warned her.

First it is dreams, and then when the ghost doesn’t get the bracelet back… well. She wishes she had listened to Kirishima.

It was really exciting, and I do hope that Natsuki has learned a lesson. Hopefully she will be a kinder person now. Maybe even become friends with Kirishima? That would be lovely!

I also loved that we got a backstory on the bracelet and the owner of it.

I can imagine that Akahoshi was pissed off, I would also be a bit unhappy if someone new would pop in and just take a role I have been practicing and hoping for. Though I have to say she went WAY WAY too far with her jealousy and hatred. Just dedicate all your time in that side role, and who knows you may just get a new lead role next time. But oh no, this girl must go all out, and is then surprised that people in her class/club are getting pissed at her. Yeah, girl, maybe you should understand.

The ending? Ohhhh boy, I didn’t expect that. I was already wondering when it would turn creepy. This story very much reminded me of Jigoku Shoujo or Zekkyou Gakkyuu.

Urghhh, a talking mascot/spirit animal. Sorry, not a an of those. And really, why didn’t the girl push a bit more to get her “friends” to understand that summoning Kokkuri is a bad idea? She should know the dangers given that she is a medium. Tomoe is such a jerk. This story was also pretty boring, and really, I couldn’t really care about any of the characters. Given all the other stories this one was the tamest so far. Sure Kokkuri/the demon was creepy, but that was it.

Ohh, a story about a creepy doll! While I hate dolls, and avoid them like the plague, I do love stories about creepy dolls. And this one features a very jealous doll who doesn’t seem to understand that little girls grow up and may want something real instead of a doll.

I didn’t like how our MC made such a fuss about finding that message on the phone. Given all the weird things that happened that day, why didn’t she just listen to her boyfriend and talk with him.

Also, how close is the boyfriend living near the girl? During one of the scenes he is on the phone with her, something happens, and the next moment he is at her home.

The ending was a bit anticlimactic, though I did like that last page. Oh my!

Better than the last story, but still not as creepy as story 1 or 2.

Eh, that girl… that is not how friendships work. You can’t just act like that. This isn’t Pokemon Go: Friendship edition.

And oh hey, suddenly someone appears next to you without you hearing them, plus you thought they looked creepy at first… I would be way more hesitant to talk to them.

It was quite a creepy read with all the accidents, her finding out the truth about Mitsuki (a bit coincidental if you ask me, but eh), though I did feel the ending was a bit rushed/weird.

Aww, that poor girl. I just wanted to hug her and whack Megumi on the head. What a vile, vile girl. Comes in at school as new girl, and then acts like Haruka as soon as she shows Megumi some kindness. And not just small stuff, oh no, she looks like Haruka from her outfit, her hair, to all the other little details.

I also didn’t like the class. Really? Haruka, the girl you all love, finally speaks up, and you all side for Megumi? What the hell?

The whole story just rubbed me in the wrong way. If Megumi was a ghost or an evil spirit I may have liked it more, but now I was just deepy disturbed.

Plus, I am sure that when mom comes home she can discern directly who her real daughter is. Come on. And I can’t forgive grandma. Even with bad eyesight, how can you not know your own granddaughter who cares for you so deeply? How can you protect someone who is not your granddaughter?

All in all, a mixed bag. I had hoped for consistent good stories with ghosts and ghouls, lots of creepiness. I especially missed the creepiness.

The art varied per story, which I quite liked. I liked that, even with different styles, they still matched together.

I am still happy I read this short story collection, it had good moments of creepiness.