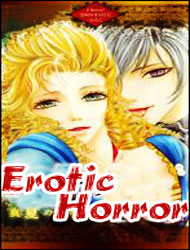 This collection features 5 stories. I have written a short review for each of them + also given them a rating.

Yes, this was a good story, but dang it was messed up in all the places. A curse send through mail, allowing you to transfer your bad things, your flaws, unto someone else.

Yuko, a girl I thought was dang pretty already, is at first hesitant to send all flaws to her best friend, Chieri, the girl who is the recipient of the curse, but then when she has a chance to be closer to her crush that one little wittle pimple can’t stay of course.

And from that point the story gets more and more disturbing as we see Chieri be the recipient of many things. From tiny pimples to bigger injuries. I just felt so sorry for the girl. That her friend would betray her so badly. That she would choose beauty over friendship. Over a human life.

Does Yuko feel remorse? Eh, at first, but well when the crush comes into the picture all morality is thrown out of the window.

The ending, wow, man, I thought this manga couldn’t go any further in creepy mode, but we find out what happened to Chieri, and the decision Yuko must make.

So be warned, this one is disturbing and I really wanted to whack the characters on their head multiple times for the choices they make.

Please think carefully when you wish for something, because that wish may come true!

A girl who visits the fortune teller with her boyfriend gets told she will be with him forever… however reality quickly catches up and you may guess what happens next.

Wow, I hated Sana. I thought she as a cute, sweet girl who really liked Misaki and cared about her, but around halfway in the chapter she shows her true colours. And the girl is just a manipulative wench. A terrible person.

I felt for Misaki, first she gets told her love is destined forever, then her boyfriend breaks up, and then all the other things. From what I can see she is just a sweet girl, though maybe a bit obsessive about things.

I liked that, while the story is short, the characters are written well, we see some parts in the past showing more about the relationships between these characters.

The ending, holy. Holy. What the hell? I guess the theme of this manga is going to be disturbing? As that ending was just OMG. It broke my heart, but I was also reeling back from what was happening.

Mostly rated this one lower because Hotaru for most part was annoying. After a while she started getting better and I liked her more, but yeah, it took a bit of time.

Also, this one wasn’t disturbing, in fact it was just very sad. A girl falling in love with a guy who is alive, and the reverse is also true. The guy fell in love with her. A love that isn’t meant to be. Though, given Japan, one can always hope for reincarnation to happen. Maybe they will meet again.

I liked that this one, instead of so many of the other stories I read over the days, featured a male MC.

The ending made me feel sad.

This was sad and, at the end, disturbing. But also so very sweet. A girl who is called a Shinigami due to what has happened to her family and those around her falls in love with a sweet guy.

I just loved the guy, how he never gave up on the girl, how he visited her spot every day, talking to her, going on dates, I was so worried though. IF the girl was really a Shinigami or caused injuries/death, would the guy die soon? Oh my! What would happen. Well to answer that, more cuteness, some panic moments, but lots and lots of aww, adorable!-moments.

The ending was WOW. I hadn’t seen that coming, and it does explain quite a few things about that person. Creepy!

The last page made me so so happy.

Eh, eh, ehhhhhhhhhhhhhhhhh. What the hell? That was certainly confusing as hell. A girl stuck in a loop, playing the same day over and over again, each day ends with her crush dying because he gets stabbed. Yep, lovely way to end a day, no?

With each day we find out more about the relationships between the girl and the boy, but also who the stranger is that stabs our MC’s crush all the time. Eventually we get a big hint, and then the picture clicked to me. I read comments on the manga and re-read some parts to make sure I was right, as it was a bit confusing.

Cleverly done, author, very cleverly done.  claps I feel kind of sorry for the girl. Does she really understand what her actions caused? Or was she so far in things? I guess we will never know.

And so ends another short story collection. This one wasn’t as horror or gruesome like the others I read the past days, but I have to say that it was a good one. It is nice blend of tragedy, creepy stuff, and romance. With some twists and turns.

Just like we have 5 stories, we have 5 artists. I quite liked the art in this one, all 5 of them had consistent good art. I do have one favourite, and that was Shinigami Shiiku.

All in all, this was a good read. Hopefully the next short story collection will be a bit more gruesome though.