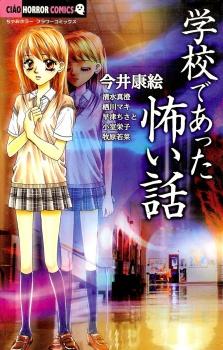 I will write a short review per story and also give it a rating.

Ah, a cellphone curse. I just adored that this one takes place before everyone had a cellphone and that it isn’t strange that someone didn’t have one yet (like our MC’s boyfriend).

I liked that the creepiness started right away, not wasting any time. As the story progresses everything gets way creepy, up to the point that welp, I never have my phone next to me while sleeping, but I will never do it from now on. 😛

Maaya? Really? Keeping calm is nice and all, but two of your friends have disappeared and now is not the time to be gentle and fluffy. Then again, panicking may also not help, but it may feel more realistic given the situation and the creepiness happening.

I didn’t like that president girl, you are just jealous, no need to be such a bitch about things. grumbles

Etto, how does someone fall over a phone? In the next panels it is clearer, but when she fell I was just laughing. Much needed after that horror revelation. But still, not entirely what you want from your audience.

The ending? Eh…. Not to sure how I felt about it. On the one hand I liked it, as it made it seem like it was just a story told by 3 girls, but on the other hand the shift was too sudden. I was still fully invested in the main story, the ending there.

A sweet girl who studies a lot (mostly because of mummy dearest) is able to make wishes when she gets a special message from someone named Goddess of Wishes. I just knew that this was going to end up badly. Come on, headaches? No recollection about what has happened? Those pictures? I just wanted to boop our MC on her head for continuing with those wishes.

And then it went wrong, and I was just shouting: I KNEW IT! OH poop, then it got scary as we finally find out about the goddess. Welp. I didn’t expect the ending to happen, but I guess, now that I think back, it was inevitable.

Um, well, this one immediately went for the creepy and icky. Dang, these stories normally go to creepy pretty fast, but this was a record. Plus, it was disturbing. Not the best way to wake up, seeing your parents tuck into that.

Then class/school is also very hellish. I actually felt sorry for the girl, well, up to the point of the revelation. Which I definitely didn’t see coming, which may have to do with how we see the girl do her things.

But it was mostly confusing, in the end I get the story and it was a pretty good one, but I am not sure if I really liked it overall. It was creepy (and sad) though. But, I don’t think, even with all she did, she deserved this. Isn’t there a way to say sorry? To tell she has regrets? To make up?

Another magical notebook? Or is there more to it? From the moment she went to the cellar and saw those cribs, and the reaction of her grandma when the nurse was confused, I knew what was going on. No magical notebooks, but something much more nefarious.

I didn’t like how everyone didn’t believe Sakura. I guess the evidence is there, but come on, anyone rational can see that Sakura herself is worried and stressed out about the things that happen.

And sorry, but when Sakura found out the truth, got that diary. I was just rolling my eyes.

So, yeah, I didn’t like this one at all. It just frustrated me. is such a whiny brat and I was just pissed at the ending.

Well, kids, if you ever find a random broken looking flute, don’t play it. Really, it is for the best because dang, that is just creepy as hell.

I still don’t get the whole obsession with recorders/flutes in Japan. I see it everywhere, manga and anime, and I just understand why kids are forced to play the recorder. Some people just don’t have musical talent, and I feel sad for those that are forced to perform in front of the class for a test.

The teacher was just terrible. So, you pay a visit to the family because Narumi hasn’t been around for 3 days, the mom says she is worried as her kid is continuously playing, and you just tell her that it is OK, because she plays a beautiful sound and you have high expectations… Whut? Woman? Please.

The ending? Yeah, I am wondering about that. What ending? Especially that last panel.

Normally I write while reading, but this time I just didn’t have any words for this one. A girl who transfers to a fancy boarding school, she meets a girl who warns her, there are deaths, ghosts, legends, and more. I had a laugh at the revelation at the end, boy, I didn’t expect that.

It was a pretty OK story, but it was just so different from the other stories. There are ghosts, there is a supernatural element, but it just wasn’t as creepy or exciting.

I did like that a few of the stories had a continuation, like how the curse of the phone never ends.

The art was hit and miss. Then again, different artists for each story. I liked the art of Story 2 the most.

All in all, not that good of a short story collection, sadly. I guess you can’t like them all, but I had high hopes for this one given the cover. Hopefully the next one, yes, I have more to try out, will be better.