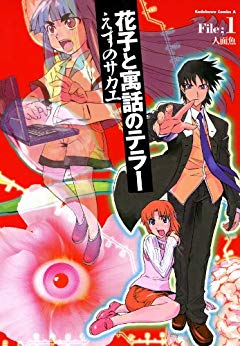 This is a review for Volume 1 and Volume 2 of this amazing and creepy series.

Meet the Folklore detective: Asou Daisuke! A guy who rather not be a folklore detective but just cannot stop doing it and gets roped in anything that has to do with urban legends/folklore. Of course I was interested in this manga, I am still in the mood for creepy and ghosts, and what better than a manga about Urban Legends coming to life! Yep. You heard me right, if you believe hard enough in an urban legend, for instance The Man Under The Bed, if you believe it is truth, then you may just find someone under your bed right now (so don’t go to sleep, muhahaaha).

Our MC however isn’t Asou, oh no, it is his new assistant named Kanae. The girl who had a case in the first chapter. She decides that she will work for him, and Hanako (more on her in a bit), and help him out. That way she can pay him back for the help he gave her. But I think that she has already paid back her debt, but she is just sticking around because she likes Asou and Hanako. The cases are terrifying but she still loves helping out.
I quite like the girl, she is strong, and she is eager to learn about these urban legends.

The first two volumes have the following Urban Legends: The Man Under the Bed (anyone want to sleep tonight?), Slit-mouth Woman (which reminded me of the movie I saw a few years ago, and made me nope), Fishmen, Devil in the Mirror (be careful what you wish for), Teketeke (creepy as hell), White Threads and Piercing, and Kokkuri-chan (Part 1, part 2 comes in the third volume).
My favourite stories? Let’s see, I would go for The Man Under the Bed and TekeTeke.
The fishermen one was just disturbing as hell, especially when we find out certain things and then are left with a twist about a certain girl and what happened to her. Ehhhhhh, as someone in the comments said, can we just bomb the lake? Dang creepy and disturbing place. 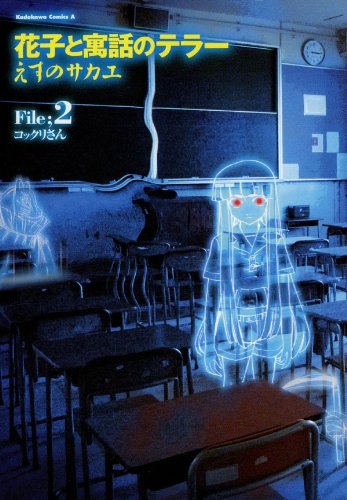 Asou has a secret though, one we slowly find out about, and finally get a peek in Kokkuri-chan. I won’t tell you what, you will just have to read these 2 volumes. I may talk about it in the Volume 3 and 4 review, but by then I don’t think it is a spoiler.
He also has something extra, 2 curses. One is Hanako who is stuck to him, and two is that if he hiccups 100 times consecutively he will die. So he is constantly counting his hiccups, trying to reset the count, and that may also be the reason why he is so reluctant to be a folklore detective. And I agree. He wants to help, but the idea that you may die after 100 hiccups is kind of a deal breaker. 😛
He is a big fan of eromanga, and one time even was more worried about his precious porn than about his broken-down home. Priorities!

Hanako, or Hanako of the toilet. You may recognise her if you have read or seen enough Japanese things. She lives in the restroom of Asou’s detective agency and she is the one with the plan. She can make a ton of awesome stuff and loves technology. She is also snarky, but also a sweet kid who is hurting because she cannot go anywhere far. She is stuck to x distance from a toilet (but she can teleport between them). At times my heart broke, as I said, she is hurting. She wants to do so much more but isn’t able to do it.

There is also some budding romance between Asou and Kanae, and I have to say I am rooting for these two to get together. However with Asou and what he may become and also his curse, the romance may take a bit longer or not happen at all. I will still continue rooting though, but I am worried it may end in drama. 🙁

The art is so-so. Not always too good, but the monsters are drawn very creepily and that is the most important thing to me in an urban legend manga.

Sadly the manga is only 4 volumes. I will be finishing it, but on the one hand I also don’t want to finish.

I would recommend this manga if you are looking for a creepy, mysterious, exciting manga and love urban legends.