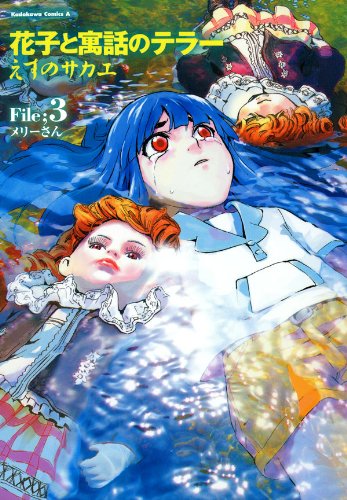 The 3rd volume, the story thickens, urban legends still roam all over the place, and we are nearing the end of the series!

Kokkuri’s chapter was a very exciting one, or I should say, the second chapter. A lot happens in this one, we see Asou trying to get back to normal, we see Kanae and Hanako try to figure out how to save Asou, but also defeat the Kokkuri. A mystery figure appears (and that person re-appears in Red Paper, Blue Paper), who remarks Asou’s change, and I am guessing this chapter is not the end of it all.
I liked that Kanae seems to be a big part of the potential solution to make Asou normal again, maybe even the key to healing him and fixing everything. Which would be interesting. Though I wonder if that will change the romance/the love they feel for each other.

I was shocked at Kanae’s weight. I do know that Japanese woman are generally not that heavy, but I thought that when Kanae said she was fat while she was just 45 kilos was shocking. Throughout the chapter she kept wondering if Asou would still want her now that she is fat. Girllll, 45 kilos is not fat. Not at all. If anything that is underweight here. You should eat more. 🙁

Urban legends in this volume: Kokkuri (part 2), Woman in the Gap (creepy as hell), Red and Blue Paper (be careful what you answer), Mary part 1 (yeah, fuck no, dolls, nope nope nopppppeeee runs). Once again, there were no new Urban Legends for me, but I didn’t mind. It is still fun, and scary, to read about them, and see what our characters get up to and if they can defeat the allorgy/urban legend. My favourite one? Mary. Yes, I hate dolls, especially if they are alive and doing creepy stuff, but I still can’t stop reading about them. Also in this one we finally see a bit more of Kanae’s past (and why the dolls are so important). The house she lived in, her grandpa, and then there was that strange doctor who turned out to be that person! OMG I didn’t see that one coming at all. Then there was a ton of excitement. I can’t wait to see how it will all end in the last part.

I have to say I was getting a bit tired of Asou and how he treated Kanae. Dude, I get it, you like the girl, you want to protect her. But if she wants to be with you, and come with you on cases to help you. Let her. They eventually did have a talk, not really in the right place or time, but I guess I can see why Asou is hesitant. Still, man up. Grow some balls. I just wanted to kick him so hard in Red Paper, Blue Paper.

Yes, I was planning on writing a review for both 3 and 4, but I decided to do one for each separately due to the amount of things going on. I don’t want to make things too long!

I need to talk about the cover as well. It is insanely creepy, and I wonder why Hanako is in a pool, crying, with those Mary’s around her. I just finished the volume and given the cover I was expecting something to happen, but nothing happened. Eh, I guess it still works as a cover as it fits the series pretty dang well.