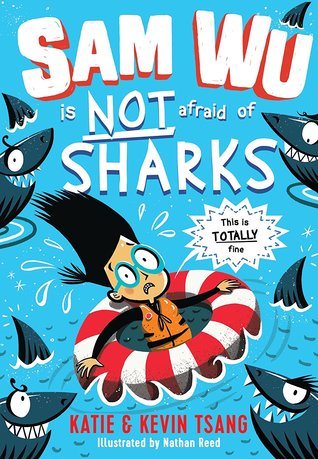 Sam Wu is back, and this time he is definitely NOT afraid of sharks.

I have to say that whereas I liked Sam Wu in the first book, I wasn’t too big of a fan of him in this. Imagination is one thing, but not knowing the difference between fiction and reality is getting annoying especially given his age. He looks to be at least 10. Yet, throughout this book, he keeps referencing his favourite show and even thinking that what happens there can happen in real life. Then there is the fact that he apparently thinks that sharks can just magically appear through pipes and hop into the swimming pool. Or that he doesn’t know that most sharks are friendly and thus won’t eat you. Generally sharks only attack humans because the shark thinks you are a seal or some other lovely animal.
Also, what 10-ish boy, doesn’t know what an aquarium is? Sorry, but that seemed really weird. And that he even thought it was something like a Chinese restaurant because his grandma explained it like this? What? Really, what? Why didn’t anyone just tell him honestly and in better words what it is and show him pictures of aquariums? In this day and age anyone can just pop online and go to the website or any other website on aquariums. It isn’t like back in the day when, if you wanted to check something out, you had to go to the library, the place itself, or call the place.
It just feels unnatural, and I do wish the parents would notice, maybe they could talk to him, or even help him. Because it is not healthy that he goes full bonkers about sharks (or ghosts, or snakes). Even preventing his best friends to go to a party, and even worrying one about sharks to the point that one of his friends is very afraid to swim (or learn to swim).

On that matter, I thought it was weird that Bernard couldn’t swim. Might be because I am from a country where young kids learn how to swim with lessons and diplomas and all that. We even had schoolswimming at a point (not sure if that is still around).

Zoe is still my favourite character, though I wish she had talked some sense in Sam. Well, at least she was trying that, but maybe also get a grown up to help out?

I loved Sam’s sister and her cat (who still has the most brilliant name). How she took that cat with her to the beach. Oh dear.

There are also shark facts (yes, thankfully these kids finally decide to check out some stuff about sharks, not that it is helping Sam, but eh, at least they research), and I quite like reading them.

Plus Sam did a great thing near the ending, even though it was all overreaction, I still think it is pretty terrific he did that. He can be brave.

He also shows that he wants to be a good big brother to his sister, and he does try. Which made me go awww.

Plus points go to Regina. I really like that girl and how she is friendly and nice, while her brother is a mean bully. She even invited all the kids in her class, which I thought was really sweet.

The illustrations were also fab and fun!

So there were fun parts, fun illustrations, but Sam being Sam just got on my nerves. I really don’t think it is healthy for a kid to go full bonkers about one thing to the point that he wants to lock himself (and his friends) in his room and not come out. I am sad that I cannot rate this book very high, and thus it means it can’t stay in my collection. 🙁 I still will try out the next book, but I will probably read an excerpt online first before buying it.