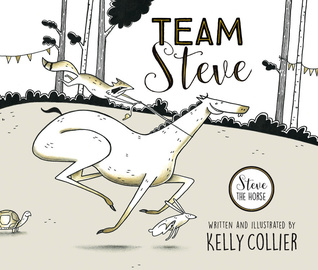 I was quite excited about this book, I love races, and I love horses, so what more can I want? Sadly, Steve is mean, egotistical. It just annoyed me to no end how he kept going on and on how he was so fabulous.

Thankfully he does show that he can also think other things, and he did train his team well. Yes, I have to give a compliment to Steve. He does a lot of things wrong, but training and motivating he can do. OK, a bit over the top at times (was that toothbrush comment necessary?), but at least he tries.

I had a laugh that the forest animals got tired of Steve and instead of letting him win by default, they changed the race and gave him the slowest animals. I can totally understand that the animals changed the race, they also want a chance to win, and with Steve around…

I also liked to see that while the animals Steve got weren’t fast, they were handy in the places the relay took them. If only Steve… Oh no, I am not going to tell you anything. I almost did, but I stopped myself in time.

The art was quite fabulous, and I loved that, even if one wouldn’t have text, you would still understand what was going on. Plus I liked the way the animals were drawn. Still pretty on point with how they should look, but also just a bit more special/different.

All in all, even with Steve’s annoying attitude I enjoyed this book. Though maybe not as much as I had hoped given it combines two favourites of mine.