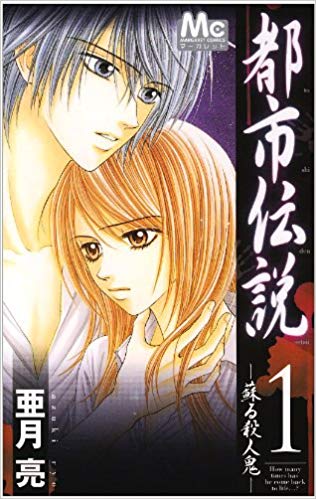 A reincarnated murderer and gruesome consequences after bullying.

On my quest to find more horror manga I stumbled upon this one. At first I thought this might be only about a murderer reincarnated, but after that one there was another story, a very creepy (and gorey) one. Both of these are kind of based on urban legends.

So first up, the murderer story. It starts quite nicely, but then gets creepier and spookier with each page, eventually even turning quite gorey at points. Things come to light about the boyfriend, including who his dad is, and that he may not only be the son of that person, but also the reincarnation, and that is where things turn creepy. Because daddy dearest? Was a murderer.

Our MC, the girlfriend, is stalked by the boyfriend’s real mom who wants to let her know the truth. What happened in the past, what the boyfriend actually is, and how with his 17th birthday approaching he will soon turn into the killer his father was. Yes, don’t ask. Something to do with the reincarnation.

There was a twist that I definitely didn’t see coming, I was surprised and disgusted. Dang, that girl went too far. Way too far.

Something weird, you would think that if the mom knows he is supposed to kill her on his 17th birthday, she would stay far far away from him. Now she just activated the gene + made sure the legend came true. I also wonder why the girl still stayed with him. She must have noticed that something happened within him. But I guess in a way the legend also works with her, I am sure that lover in the previous incarnation of the murderer also knew something was up. Maybe even knew she wouldn’t be able to run.

The second story was about bullying (people are cruel, so very cruel), a girl who died due to it, and the consequences that happen afterwards. It was a good story but a bit gorey. It was quite interesting to see what our MC had to do with the whole situation, and also how her eye (the bad one) worked with the whole situation.
But yeah, gore. Eye stabbing is just a big no no on my radar. 😛

The ending? Oh, I definitely liked that, sure was a nice twist. I also liked what the doctor did for our MC at the end.

All in all, an interesting volume, and I guess this whole series will be about urban legends? Can’t wait!