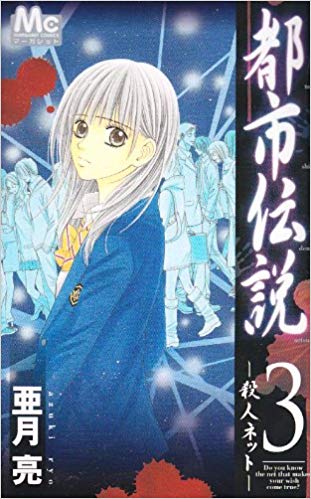 I have written a short review for each story + given it a rating.

Ohh, a website that you can access that will kill people for you (Jigoku Shoujo much?). What will our MC do? Will she have her bully (or bullies) killed?

Another story about bullying… I have seen so many horror stories that start with bullying and then have either the bullied girl commit suicide and avenge the bullies from beyond the grave or find someone (or something) to help them.

These bullies were just disgusting as hell. What is wrong with you that you make those pictures and put them online? Then even go so far to make appointments in the name of the girl who is bullied. Something is seriously wrong in their heads.

You can imagine the decision she made. I wasn’t too happy about it, but then again, I can sympathize. I can understand.

I was quite happy to see her bloom and become happy again, and that people were actually talking to her. Even her crush had potential to go far…. But of course, this is horror and supernatural, so I knew that something was coming, and what I expected happened. I was already thinking there was a catch. She could have seen this coming, maybe next time read the terms and conditions.

The site has covered their asses as good as they could. Dang…

“Am I… a murderer?” Well, do you want me to answer that question, girl? Because I think you know the answer.

This was a terrific story, pretty horrifying at times, as in human behavior.

A girl decides to live on her own (at 16!) and well, I could already guess what was going to happen. I mean it was obvious from the start. Her walk-in closet has a lock on the inside and outside (why?) and she saw someone walk in the direction of her apartment. 1+1=murderer in your closet. 😛 I was surprised our MC didn’t notice it.

As for the neighbour, he was just way too shady, I knew something was up with that guy.

I did like the MC’s boyfriend, I can imagine he was pissed though given how much his girlfriend was drooling over the neighbour.

The ending was pretty good and added a nice supernatural element.

But, due to the predictability of this one, I just can’t rate it that high. Plus, it wasn’t super scary as I had hoped when I saw the title and the chapter’s cover.

Welp, this was pretty light, well as light as it could be given the story, but then it turned so different. Oh boy, ohhhhh boy. Did I see the ending coming? Nope. And boy, it was disturbing.

Lena was an interesting character, at first I wasn’t sure what to think of her, and her attitude. She seemed really queeny and high and mighty, but then I slowly started seeing a different Lena. A Lena that, as someone else said, is forcing herself to be with the cool kids. She is not too happy with things going on in the group she is with. Something to do with the event that happened last year, when someone died.  Santa Claus. No, no, not the jolly fellow, someone else.

I was quite amazed at what she did near the end, that is really brave of her. I am sure though that she was actually quite scared even when she showed no emotion.

The ending, as I said, wow. Dang, Merry Christmas? No?

Oh, and a mention to another Santa, something that happened when Lena was just small. Yep, this story has tons of Santa Claus references and appearances.

A girl who had an accident, became blind, and is now cured. However, I think she is wishing she had stayed blind given the things she sees. Creepy!

This is not the first story featuring eyes/blindness/getting better and seeing again, so I had an idea of what may have happened and whose cornea our MC had. Especially when Daddy wasn’t so eager to share information on where he found the corneas. Red flag! Red flag!

She keeps seeing some guy as well, in her reflection. Who is he?

I loved that our girl didn’t give in to how her dad acted, she goes on investigation to seek out what happened to the guy. Was it an accident or was it more?

The truth? Aww, man, that is just sad. Of course, I knew it from the start, hello red flags everywhere, but still, it broke my heart. That poor girl.

In the end, I am not too sure if her decision is better. Yes, she can see, but does she really want to see?

——–
This was a fantastic volume in this series. Dang, I really enjoyed reading them and I am thoroughly creeped out!