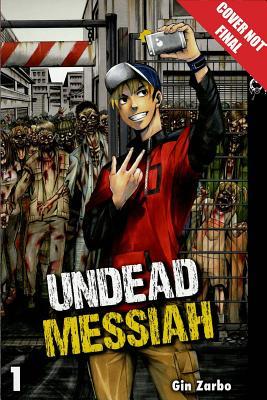 I have heard about this manga-styled comic before thanks to the German TokyoPop twitter account. I was already thinking about checking it out (reading German is no trouble to me + TokyoPop Germany I trust), but then I saw it pop up in English on Netgalley. Of course I clicked read now. Of course I couldn’t resist.

This one starts with a pregnant lady trying to get away from someone, or something. It certainly set the tone for the manga, even with the following chapter which introduces us to Tim.

Tim is a guy who just LOVES zombies. So much he is constantly playing a game called Z.A.C. and also constantly talks or thinks about zombies. Well, I can tell you that those things did prepare him in the long run for what is about to come. But I am sure he wasn’t prepared when he saw who the first infected was that he met. Then again, I was already thinking it would happen to that person. Come on, it is generally always someone they know and then you see them wavering. But I guess we can all say that we will do what needs to be done, but I can imagine when it actually happens and it is someone we know, we will all stop and try to help out. 🙁 I did think he was pretty dang tough though. Sure, his idea of just heading to the hospital is dumb, but then again, people do so many dumb things when the world goes to hell.

The hospital part was WOW, creepy as hell. Then again, hospitals with zombies are just a big no in my book. I did like that they were planning on saving the babies. Though I guess in the end they got more than they wanted. Especially Tim found out stuff that made him look differently at his family.

I have so many questions. How did the virus/zombie stuff start? What is up with the master/slave thing? Why is that baby the messiah (is he a zombie or something upgraded?)? Why is that master guy so pissed off at things starting early? What is the plan here? Why did he pick Tim? What about M-kay snorts, will she be fine?

I wonder how people would treat Tim now. His classmates tended to bully him for his weird obsession, but with the incoming zombie apocalypse? How many of those guys want the help of Tim?

What kind of nickname is M-kay? Sorry, throughout the book I kept misreading it as if someone was agreeing with someone or if they made a lacklustre comment. M-kay. M-kay are you fine? M-kay don’t worry. At times I just couldn’t help but laugh even during the moments that one probably shouldn’t be laughing, but I just couldn’t help it. I mean, it just didn’t work.

The ending was very exciting, though I also felt sorry for Tim.

The art is pretty great, I especially love how the zombies were drawn.

All in all, this is one zombie comic I would recommend to everyone. It is creepy, filled with some dumb moments (because of course no one is smart in a zombie apocalypse), has some interesting characters. I can’t wait for the next volume.