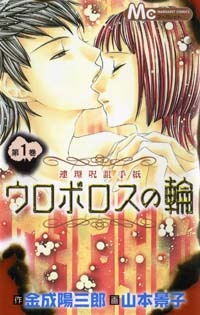 Warning: when passing around notes, one of them may just start a chain of curses and victims.

So, I am still very much in the horror manga mood, so this one was next on my list to try out. Passing notes, who hasn’t done it in school? Sharing comments and stories with your friends to pass time during a boring lesson. But what if there is a curse? What if everyone is in danger?

At first the manga starts out pretty tame, but then the curse hits and people start getting hurt. One falls off the roof (sorry, but what is up with the reactions of our cast? I get it was traumatic, but how it was handled was just weird), one goes in cathartic state and goes bonkers, yet another gets carved up with letters all over her body during class. Sadly, the story stays creepy, but I had expected more victims, more cursing. We see that everyone in the school gets the letters, as predicted by the teacher, but that is pretty much it. The scariness stops at that point and I was oh so disappointed.
That last chapter was such a disappointment. Was it really needed to add that? I mean, for me the story was over and now we have some more unnecessary dramarama.

I was wondering, at one point in the manga, plus now that I checked the blurb again it is also mentioned there, they say that if you don’t open the note, or read it, you should be safe. Yet, everyone, EVERYONE, opens the note and reads it. Plothole much? Or did the author step away from that note because otherwise the story would just die down and there would be no horror except for a few idiots who opened the letter. Whatever it is, I was shaking my head that everyone would just open the note. If I got one shaped like that? I would just throw it away. Given the previously mentioned rule, I should be safe.

There was also romance, and I am not too sure how I felt about that. 2 guys liking one girl? And that in the midst of all the curses and creepiness. Eh, it just didn’t fit. Especially since I was pissed at the one brother who just kissed our MC and ignored her stop. If a girl says stop, you stop. It is as easy as that.
Plus since both the guys are brothers… eh, you may just imagine how the drama escalated and at times I just was wondering what was more important to the author. The boys or the curses.

So yeah, fantastic premise, fabulous idea, there were good moments. But the story just didn’t go anywhere as soon as the curses flew around, and the romance was more of an annoyance than something I liked to see. The final battle was anticlimactic at best. Plus that last chapter could just have been removed and no one would have blinked an eye.

There is a second volume in this series, and I guess I will see if that one is better than this one.

P.S. I love the cover, but I still think the guy is trying to eat the girl. 😛