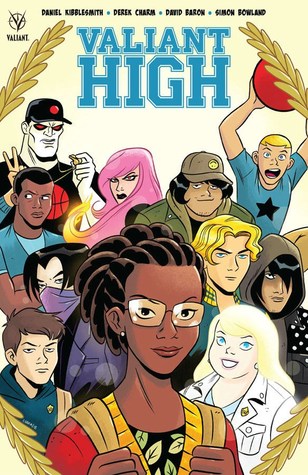 I received this book from Edelweiss in exchange of an honest review.

Welp, this wasn’t good. I was bored out of my mind for most of the book. Whiny characters, lame drama, not that good art style (at least it isn’t my kind of style, not saying it is a bad art style).

I was quite excited about this one, and I finally decided to just go for it and request it. I quite like superheroes, though I cannot for life remember if I ever cared that much about the Valiant universe. 😛 But still, I cannot resist a story that reincarnates characters into a school setting. Having them be students instead of crime fighters.

This comic places the superheroes in school, high school to be exact. Drama, powers that need to be balanced and (as it seems) hidden, romance, friendship. But also tons of boredom and I frankly didn’t have one character I truly loved. Oh wait, no, correction, I had one girl. The girl who could fly. Lol, only I have totally forgotten her name already, let’s see. Ah, Faith! Faith, I just adored that girl who was a bit chubby but all happy in her skin and I adored that she could fly.

The teachers are also superheroes though they are generally the more tired versions of our teens.

I did think it was weird that people would get punished if they used their powers. I can understand slightly that it may get chaotic, and that some powers aren’t meant to be used during several things (like telepathy during tests or using it to bully or hurt someone). But I have also read enough superhero stuff were it never went wrong. You would see people fly by over the heads of those who can’t fly, use their strength to open up lockers.

I am also a bit tired of the fact that apparently people who do athletics, the jocks, get the free reign by the teachers. It is something I have seen in other things, and it just annoys me to no end.

There was also some drama and instead of enjoying it or wanting to know more, I was just rolling my eyes (which is so not a thing I wanted to do this week due to what happened on Sunday).

We also got some mystery, action, and a villain. I was not that impressed with it. Especially given how fast everything was over. Like one moment everything went to hell, the next everything is solved.

I am not really up to talking more about this book, I just want to stop and forget about it.