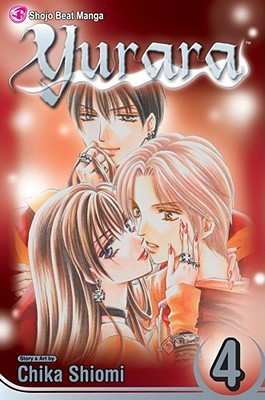 We are slowly nearing the end of the series. A childhood friend appears, a date with Meiwa, struggling with your other self, and troubles in romance-land.

I am rating this one a bit lower than I had initially planned. Now that I slept and thought I just don’t think this one is worth a 4 stars. I just have quite a few issues.

For instance the sudden childhood friend appearance… Who really doesn’t get that maybe you should lay off with being so close to Yurara. She is not interested in you, and being so stalkery around her is just creepy. Yes, you kissed, yes, she helped you out. That doesn’t mean she wants to be the same way now. It has been years and years. You were kids. Plus, maybe also because I found him a nuisance (as it seems that the author just had to add yet another dude who is interested in Yurara (and Yurara (onee-san)), I just didn’t like the character. He is apparently a bit younger than the rest of the group yet he acts like he is 20 years older. We do get some backstory on him and why he is acting like this and that made it slightly better, but still I just wanted him out and away.
Also I just wondered how dumb he was that he didn’t even get the whole transformation (Yurara (normal) to Yurara (onee-san)). Multiple times he is confused as to how she magically appeared. rolls her eyes

I loved that Deiwa is finally taking things seriously with Yurara (normal). He is finally showing that he can be mature, that he can stop flirting with every living girl (or dead) for the sake of one girl. Though I do feel so sorry for him, he knows that Yurara (onee-san) hates him and loves Hoshino. Until Yurara (normal) learns to fend for herself he has to live with the idea that inside the girl he loves is a girl that hates him and loves someone else, his rival. And that this may break everything.
Their one date went all wrong when Yurara (normal) transformed in Yurara (onee-san) and didn’t transform back. 😐

Then there is the whole Hoshino x Yurara (onee-san). These two clearly love each other, however there is of course that tiny trouble of Yurara (normal)’s body being used for their meetings. And Yurara (normal) is currently dating Meiwa. Yep. I felt very unhappy about this whole situation. I get that they love each other, I get that, and I am more than hoping they can be together, but not in this way. This way only hurts those around them, hurts the host body (Yurara normal), hurts Meiwa. And it needs to stop.
I am a bit confused though, at times it seems that when Yurara transforms she is still herself just with a different personality (more violent and flirty) but at other times it seems like she is also a totally different person and only gains conscience when she transforms back (for instance the times that she transforms back, stutters, blushes, and then flies away). In this one we again see those two sides. In the last scene, the one that broke my heart, it seemed that Yurara (normal) understands what is happening and that this will damage her relationship with Meiwa yet she continues with what she is doing as Yurara (onee-san).

Hoshino made my blood boil with what he tried to do. I get that he wants to be with his girl, and wants to talk to her, but to purposely find ghosts to have her transform is just icky.

We also have another character, a cousin of Hoshino. She is now living with his family after her mom died. We also get a small story arc about her and her feelings. The transformation was a bit too fast for me. It just didn’t feel natural, but then again, it seems the rest of the characters also thought that way.

As you can see, I had some issues with this volume. I do hope that the next, and last volume, will resolve everything correctly. Just let Yurara (onee-san) find another body, stop using Yurara (normal). Have all our couples be happy instead of them all breaking.