For today’s post I got information on book (Beauty and the Beast, eeep!)/the author and an excerpt (thanks again!).

Are you ready? Here we go! 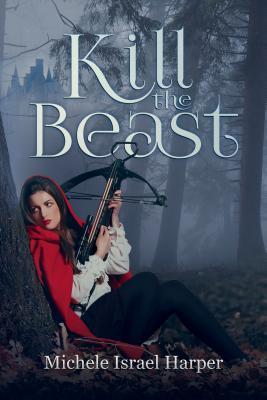 Ro remembers the castle before. Before the gates closed. Before silence overtook the kingdom. Before the castle disappeared. Now it shimmers to life one night a year, seen by her alone.

Once a lady, now a huntress, Ro does what it takes to survive—just like the rest of the kingdom plunged into despair never before known. But a beast has overtaken the castle. A beast that killed the prince and holds the castle and kingdom captive in his cruel power. A beast Ro has been hired to kill. Thankful the mystery of the prince’s disappearance has been solved, furious the magical creature has killed her hero, Ro eagerly accepts the job to end him. But things are not as they seem.

Trapped in the castle, a prisoner alongside the beast, Ro wonders what she should fear most: the beast, the magic that holds them both captive, or the one who hired her to kill the beast.

A Beauty and the Beast retelling

Michele Israel Harper spends her days as a work-at-home mom and her nights typing away furiously on her laptop. Sleep? Sometimes… She has her Bachelor of Arts in history, is slightly obsessed with all things French—including Jeanne d’Arc and La Belle et la Bête— and loves curling up with a good book more than just about anything else. Author of Wisdom & Folly: Sisters, Zombie Takeover, Beast Hunter, and Kill the Beast, Michele prays her involvement in writing, editing, and publishing will touch many lives in the years to come.

Excerpt time! And I am very happy to have you here, thank for the excerpt. <3

“Thank you so much for having me today, Mehsi!

Below is an excerpt from my new release, Kill the Beast, a Beauty and the Beast Retelling.”

The reason I chose this excerpt is because it’s the first time Ro realizes Gautier may not have told her everything about the beast he has hired her to hunt and kill, and she begins to struggle with whether she should press forward and get her job done or try to find out what’s really going on. (And it’s one of my fave scenes.) Plus, I hope you and your readers will enjoy it so much, you’ll want to read more of my story. Enjoy!

“But what is she doing here?”

Ro’s eyes flew open as the roaring words pounded through her consciousness and ricocheted off the walls. Her gaze snagged on the enormous beast—even more grotesque in the glaring candlelight, if that were possible.

He kicked a vase, shattering it, then raised a chair and slammed it on the ground.

The splintering wood covered the groaning protest of the bed as Ro jumped off it and braced her back against the window. She felt for the latch and her coil of rope at the same time. Her rope was gone. The latch wouldn’t budge.

“What?” the beast bellowed to no one in particular. His ears perked, then he spun and stared right at Ro.

Her hands went for her weapons. Gone.

His pounding steps advanced until his bulk loomed over her, blocking every other sight. She fought to open the window at her back.

“What are you doing in my castle?”

Ro bit back her unprofessional shriek and flinched at the sheer volume of his voice.

The beast leaned closer. “I said, what are you doing here? Where did you come from? How did you get in? Are you stupid, girl? Answer me!”

Her hair streamed behind her with each gust of his foul breath. She stared at the beast, not breaking eye contact, refusing to cower, barely restraining her panic.

The beast’s chest heaved, drool dripped from his fangs, his hair was matted and full of burs—he was by far the worst-looking fairy creature she’d put out of its misery yet—and still not a white mark in sight. Anger boiled in her chest. Gautier would answer to her. Whenever she escaped.

Something snagged her attention. The drool—it no longer turned into acrid smoke. Her gaze flew to his eyes. They were no longer red, but a clear blue. She blinked. Blue?

“Oh, by all the saints, do you not speak French? English perhaps?”

The beast broke into the most ancient-sounding dialect of the English language she’d ever heard. It was painful, really. She wanted to cover her ears at the screeching noises he made and laugh at the same time. She did neither.

Ghosts of words teased her senses. “Maybe she’s a mute?”

Her eyes jerked around the room. Who’d whispered that? Her eyes sought the beast again and stayed there. No use looking for phantom dangers when a very real danger stood before her.

He sighed and straightened, moving away. His head nearly touched the vaulted ceiling. Was he twice as tall as she? As he moved away, she searched her person once more for a weapon. Any weapon. Even the small knife in the tip of her boot was gone.

“You won’t find them. They’re in the chasm below.”

The beast had switched back to French.

Her hand froze on the tip of her boot. She slowly straightened as the beast ripped open a drawer, tearing it from the bureau, and flung its contents all over the floor. Paper fluttered, and writing instruments clattered to the ground. Going down on all fours, he chased down what he wanted while she looked for an opening. Any way of harming the beast. Maybe she could get past him to snatch one of the weapons from the hallway.

He lumbered to his feet and came toward her. “Here.”

He shoved his giant fist at her. A piece of paper, yellowed with age, was speared on his claws, practically shredded. A frown peaked her forehead, but she lifted the paper from the jagged claws anyway. He stretched his other clenched paw toward her and opened it. Within rolled three broken fountain pens, and one whole.

She kept the excitement away from her being and slowly reached for them. Her fingertips brushed the velvety softness of his paw as she withdrew.

Electricity zapped her fingers, reminding her of the display outside. Though this time, she couldn’t see its arc. Time stilled. In rapid succession, her entire hunt through the palais played through her mind. From the beast’s perspective. He’d watched her. The entire time she thought she was hunting him, he was watching her.

He jumped and jerked away.

Her hand tingled, her heart raced, and she felt heartbreaking emotion for the first time in years. She couldn’t name it, but it was there. Painful and raw.

Shoving the unwelcome feelings away, trying not to gasp for breath, she forced herself to study the beast. Never before had one of the fairy creatures shown such intelligence. Such—humanness. They either were full of greed, hatred, or violence, or they were pure animal. Nothing more. The curse had let them into her kingdom, every last one of them. She was determined to see them all snuffed out or returned from whence they came. Just as she’d see to the end of this one. The cursebringer.

The beast sighed heavily and sank down on the bed. He waved his hand at an inkwell on the desk with a weary sigh. “Go on, write it down, girl. What are you doing here?”

Ro stared at the dry fountain pen, wondering where in his neck she should stick it. Only a fatal blow would do. She couldn’t miss. And if he truly was protected by magic in the absence of a white mark—it might not do any good anyway. Her eyes flicked over his form. Perhaps…? Non. It was too much of a risk.

With a crack, the bed went down.

Ro jumped, but the creature didn’t seem to notice her or the fallen bed.

The beast sighed again. “You’re right, François. She probably can’t spell either.” The beast straightened and glared at her. “Why are you dressed as a man?”

Ro glanced down at herself. Her dark-red blouse was stained, and her knee-high leather boots and tan trousers had seen better days. She’d been stripped of her red cloak and weapons, and only her brother’s brown leather jacket and her wide belt remained of her gear.

The leather cord that held back her braid was missing, and her flattened black curls tumbled over her shoulders in ridiculous cascades. Why hadn’t she chopped it all off as she’d been meaning to?

“It’s unseemly.” He jumped to his feet and came toward her, pausing inches from her face. “While you are in my château, you will dress as a Mademoiselle ought! Females shouldn’t show their legs.” The great beast snorted and drew back. “What is that awful smell? You stink, girl!” He sniffed again, cautiously. “Garlic, is it? François, she must be a peasant. Put her to work in the kitchen.” He stomped toward the door then paused. “Fine. Chantelle, draw her a bath and see to it she is properly clothed. Then put her to work in the kitchen.”

The door slammed. Ro stared at the closed door, mouth ajar. How did the beast’s voice possess such cultured tones? And who in all the realms was he talking to?

As one awakening from a trance, Ro ran to the door and tugged. Locked. A heavy bar slid into place on the other side. She slammed her fist against the wood. “You cannot keep me locked in here, Beast!”

To Be Continued in Kill the Beast, available now…

This Blog Tour was organized by:
Love2ReadLove2Write Publishing