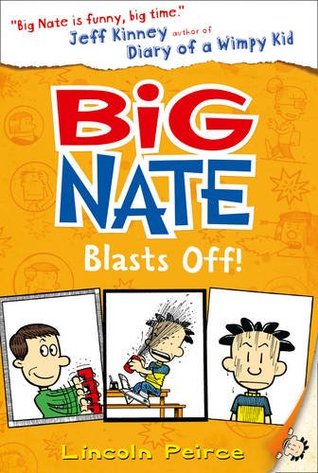 So, this is my very first Big Nate novel. I have read a few Big Nate comic books, but never managed to read any of the novels. I have to say that I really loved this one. It is a mix of text + comics, so a graphic novel, which fits perfect with the character.

I feel like Nate has a lot to learn about his comics. I agree with the principal and other characters. Nate’s comics are quite often about making fun of people, in a mean and rude way. And sorry, I get that he isn’t happy with these people, but making fun of them makes you just as bad as they are (especially in case of Randy). I do hope that Nate learns to make comics that are fun for everyone, without hurting anyone.

I loved that Nate has another crush! Yep, no more Jenny. Thank heavens. I was already not seeing that having a future, and I was hoping that Nate would also see it. In this one Jenny clearly has found another guy she likes (and we also see how they met up). Thankfully, there are more fish in the sea, as Nate meets with Ruby. It was enormously adorable to see them get closer. Even if that got him into trouble with Randy, who also likes Ruby.

Randy was a terrible character, and frankly, I just couldn’t care about his sobsobstory that we learn about later on in the book. I guess we are supposed to feel sympathetic because his life sucks, but sorry that just doesn’t excuse you from being a crappy person and all the bullying you do, and have done, throughout the years. Because this isn’t the first time he and Nate go head to head, apparently it has been going on for years. 😐

The Mud Bowl? I just love it, plus the revelation of Nate’s father about it. I wish I could participate in Mud Bowl. Frisbee is fun, and not caring about cleanliness is also fun at times.

Then there is the newspaper and Nate’s feelings on it. I can understand his feelings, that newspaper does sound extremely dull. And who decided it should be a named Weekly Bugle when it is only monthly? 😛

Of course, there is also enough friendship. Nate has some terrific friends, even if one of them looks at Dee Dee has a lot to learn about secrets and not spreading them around.

There was also some stress for Nate regarding his family. I won’t spoil what is going on, but dang. Poor Nate.

Also nice that Nate’s comics and the normal illustrations differ. It took me a bit to get used to them though, but after a while I could appreciate it.

All in all, I definitely want more of these Big Nate novels! They are just too much fun to read, I had quite a few laughs, and I also flew through the book. Before I knew it I finished the book! I would recommend it to everyone looking for a fun book.