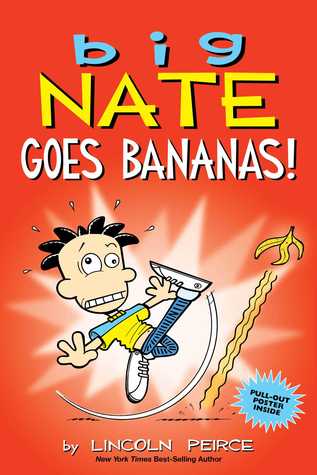 Gee, how could I resist? I have been looking forward to a new Big Nate book ever since I finished the last one. I kept hoping that it would be there soon so I could read more of Nate’s adventures in life, see his friends, and also see what themes we have in this book.

This time there is quite a lot of baseball. It is not a sport I am that into, it seems a tad boring to me. But it was still a lot of fun to read about how they changed the name of their team (poor guys, not really a good choice either way), how Chester missed the deadline and is now a deadly force on another team (RIP our guys, and girl), and to also see some games.

The cereal mascot thing was fun, and I actually thought Nate had a nice idea/design. I didn’t like that Artur also participated, it felt a bit too much like he was copying Nate. And I also could understand Nate’s reaction to it all. He just wants something of his own, and now someone else, someone who is generally better at stuff, also does the same thing. 🙁

I adore Nate’s thought bubbles as at times it goes way out of character for him, plus the expressions he often pulls while thinking are just hilarious. Like a kid that has seen it all. 😛

Gina was again annoying as hell. Girl, get a hobby. One that doesn’t include being a whiny brat or being rude to people.

I had such a laugh when the captain of the team asked Nate’s sister to prom and all the chaos that came from that. Oh good grief. I did feel that Nate was a bit too annoying at this point though, that even went so far to constantly comment on everything, and also even get Ellen’s boyfriend. rolls eyes

And of course enough school stuff popping up. Nate trying to talk his way out of projects, his visits to the principal’s office, all sorts of classes and tests, and more. While he gets into trouble all the time, I have to applaud to what Nate does, I mean not everyone can do the stuff he pulls and thinks up. Like what he did to the Coach. Nice to also see report cards going modern, though it means an extra level of difficulty for Nate to get rid of the terrible grades he probably got.

Also that stab towards Nate’s shirt always be the same. Welcome to cartoons where people generally never change their clothing and always wear the same.

Oh, and we learn something new about Nate and bananas.

Of course there is a lot more happening, you will definitely not be bored while reading. This was oh so much fun to read and I can’t wait for the next book to make an appearance. Hopefully in a few months. crosses fingers And of course, I would recommend this volume.