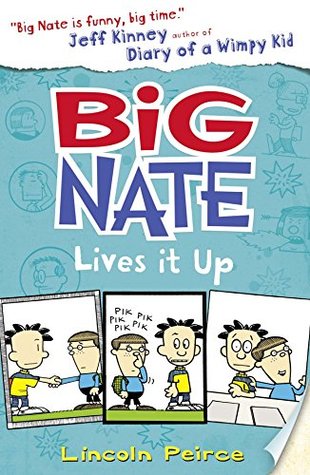 My second Big Nate novel, and while I didn’t like it as much as I did the first book, it was still very fun to read!

My main trouble with the book was Breckenbridge. Sorry, I just didn’t like the little guy. How he never even tried to participate in whatever Nate wanted, how he dismissed Nate’s likes, and how he just stuck like glue to him. Sorry, especially the last one was just something I didn’t like. I understand that you are new here, and you may have a hard time adjusting, however I feel that you should also do things on your own. The forced friendship stuff was just not my favourite, especially when it later turned into real friendship (though would you call it that?).

Of course, Nate wasn’t always being the friendliest, but I can kinda (just kinda) forgive him. After all he was forced to be buddies + the guy just didn’t think to go and find another friend or a group.
But in the end he sees his faults, and I am happy he did.
His comics, though there are less than in the previous book I read, were still fun. He still has a lot to learn about being kinder, but I still liked reading the comics.

We also have comics by someone from a hundred of years ago. I have to say that I wasn’t that interested in them. They were plain and a bit boring. I just didn’t get what was funny about them.

The mystery behind Breckenbridge, I had several theories, though I never guessed the one that was the truth. Wow, I never expected that from Breckenbridge!

The centennial? I loved it, that, even with limited funding (as really, the school was falling apart, to the point of it being very dangerous), they made a really fun day for the kids. That scavenger hunt? I wanted to participate! The price was terrific. Plus it was fun and exciting to see what Nate and his group found. Sure, a bit coincidental, but eh, it is a children’s book and they do love those coincidences. 😛

I still love the combination of illustrations and text, they fit perfectly with Nate’s story.

Oh, I would love a book from Dee Dee’s POV, she is just such a hilarious character, always bouncing around and wearing outfits whenever there is a special day.

All in all, an OK book, and I hope that my libraries will get more of them.