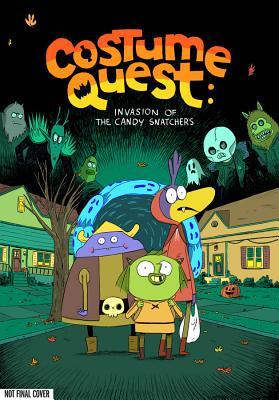 So I played Costume Quest YEARS ago, I just had to check out this comic when I saw it.

A monster named Klem (snorts because Klem is a Dutch word and means clip/clamp in English) bribes his way into a party with the older (and cooler) kids for candy. And what better place to get candy then on Earth/human world where it is Halloween! They won’t even need a costume as they are scary already (well, some of the monsters are, Klem and his friends are just cute).

But of course Halloween isn’t fun enough, we also need 3 baddies from Klem’s world who are determined to ruin things. Really, I would rather have had this whole volume be about Klem and his adventures. Though I would also have rather seen it also be about trick or treating, and less about Klem and his feelings. How he feels about the girl he likes, about his friends and how he dragged them with him. About their quest to find their friend.

Plus invasion of the Candy Snatchers? There was a little bit of candy snatching, but most was just drama and feelings.

I did like that we have a meeting with characters from the game!

The ending was sweet, and I was happy for Klem and his friends.

The art was pretty decent, I do feel the style fits perfectly with the Costume Quest world.

But yeah, all in all, this was a disappointment to me. I really was hoping for something magical and tons of candy and trick or treating, but instead it was mostly about feelings and some candy.