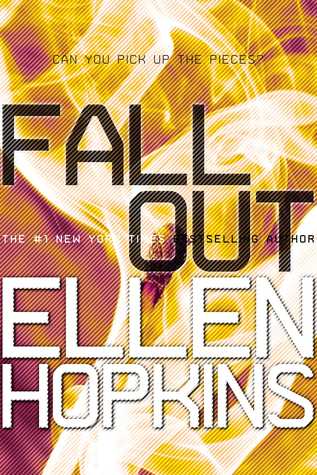 This time no Kristina, no this time we get 3 of her kids (out of 5) telling their stories.

I was quite delighted that we didn’t have any Kristina any more. Don’t get me wrong, her story was heartbreaking, but I was getting tired of her making all the stupid mistakes over and over again, and apparently not always caring about people. However, I have to say, that while reading this I felt oddly protective of her. I get that her kids are hurt, that they are unhappy with how Kristina treats/treated them, and more like that, but really they were just being overkill. Plus it was interested that while they were all like Boohoo Kristina, and we will never do her mistakes, but they all did or you could see they were clearly all having her genes (or those of their dads).

Hunter was my least favourite character, he was A TERRIBLE person. I disliked him so so much. For instance when he cheated on his girlfriend (and then frankly didn’t understand why she was so pissed at him), or when he was bitching about Kristina, instead of listening to her and giving her a chance (as she does try to make good with people, but some parts of her brain are just fried). Then there is one instance, at the end, that made me flip so many fucking tables. He tells Kristina he met Brendan (aka mister Rapist), and then he has the fucking guts to say this to her in regards to her rape: “Don’t suppose you’ll take some responsibility for what happened that night?” What the actual fuck dude. That is victim blaming, you don’t fucking do that. Fuck you. And I will throw in some more fucks for good matter. It doesn’t matter if she instigated it (which she didn’t) , she fucking said no. NO. And that means NO. Again, no. Bah. And throughout the story he makes some really sexist remarks that made me want to kick him in his fucking balls so so hard. He just doesn’t understand why Nikki gets mad at him, and just thinks she is acting like a silly woman. What the hell dude. Also I found it highly creepy he would just enter her home, even if she wasn’t home or if she didn’t know he was coming inside.

Summer was a pretty nice girl, but I was pissed at her not being able to close things off with Matt better. I did like that she at least was brave enough to say no to meth, as Kyle, her new boyfriend uses it. Though there is one instance she says yes, but thankfully Kyle, who at first seemed to be a pretty big dickwad turns out to be a very sweet guy.

Then there is Autumn, the only one from Kristina’s kids who has no contact with Kristina. We later find out why, and I was so sad for her. That poor girl.

There were a few parts in the story that had me going NOPE, with Cora’s wedding, and what happened at the foster home.

It was all interesting to see how everyone connected, who their fathers were, and if Kristina still had contact with them. If she tried to meet up with them. I also loved seeing how Kristina was doing, if she was drugfree (so far it seems she is, though her smoking habit has gone up way too far). I loved how the story and the characters all came together in the end. A real Christmas miracle.

Each character has their own font, which made it easier to discern between them, though they were pretty discernible on their own already.

We also have several newspaper clippings and I am delighted they are added, as they gave insight to characters from the previous books.

There were times I didn’t like the book much, but in the end I just have to give this book 4.5 stars as it was masterfully written and I just adore how everything got together.
I am definitely happy that I had a chance to read this trilogy, and I would recommend it to everyone.