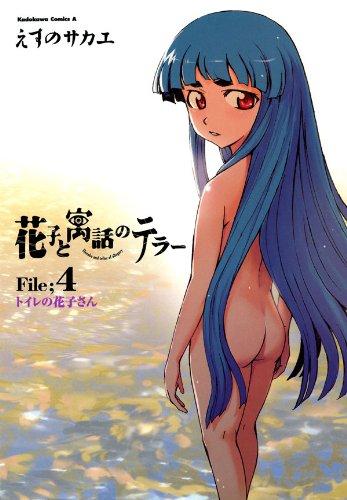 <The final volume. And the series ends with a bang. Not much urban legends this time (just Mary), but there is enough else coming that will keep you on the edge of your seat.

The last part of the Mary and dang it was creepy, gross, and heartbreaking. Poor Kanae, she probably forgot about the doll, about the reason it was there in the first place. I did feel sorry for her twin. Never been born. Never had the chance to live. Still no reason to just destroy everything because Kanae forgot. The chat in the last few pages, man I just wanted to cry. Lastly, when she grabbed the sleeve and said Asou. Gosh, I was just tearing up so much. 🙁 🙁 Finally! Finally these two. Gosh, that took you 3 volumes and 1 chapter to finally do that. My goodness. I thought you two would just keep on bickering and trying to not talk about it.

I do want to say that the cover made me feel uncomfortable. Hanako may be dead and a ghost, but she is still a child. Looks like a child. I don’t need to see a naked child on my covers or in my manga. No thank you.

Finally we get a bit of a backstory on Asou and Hanako. Man, that was just heartbreaking. I guess this whole volume is meant to make me cry.

I was a bit confused that Hanako could go outside so far. I thought it was established earlier that she couldn’t get far from toilets or there would be a barrier. However we now see her go through parks, roads, and more. And I don’t really see a bathroom anywhere near those places.

Also interesting to find out who or what Tachibana Mafuyu is/was. We saw her appear in the previous volume, and she plays a bigger role in this one. A very big role. She is kind of like the end boss if I have to give her a name. She calls herself “The Teller of Allegory”. Though I was a bit confused about her actual origin. What was she in the end?

The ending was really exciting, go go Asou. I am happy with how it all ended and how everything (well, with the exception of that woman) was finished neatly.

All in all, this was one exciting series, I really had a lot of fun reading it. We have urban legends, but also a deeper story. Some romance as well, and some humour. I would recommend it.