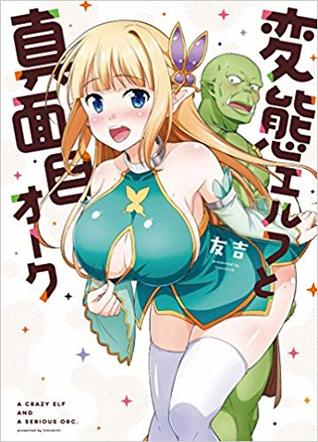 An elf has a very curious request. Something the other elves really are not happy about (and for good reason). She is swiftly kicked out of the elf village.

Sadly for our elf, she meets the one orc (though maybe there are more?) who isn’t interested in nomming on delicious elf meat. Oh no, she meets the one guy who has made a vow. No more elf violating. I just adored how the orc kept trying to not do anything, but really the girl was making it terribly hard for him (with constant stripping, trying to do lewd stuff).

I did feel sorry that, as an orc, he was always looked at as if he was savage (which given their history, I can understand, but still, it would be nice if instead of immediately attacking they would give him a chance. Because this guy is the sweetest and has a heart of gold.

The elf, well, she was pretty dang weird, and at times I wondered about her sanity.

At one point we get an overprotective parent in the mix, and sorry, I just didn’t like that guy. I understand he wants to save his daughter, but really? Maybe you should save the orc from the girl. 😛 I am happy with how this was all resolved in the end, I guess given the state of his daughter, and the fact the orc wasn’t the happiest, he didn’t have a choice. Plus I really loved what kind of promise the orc made!

I loved seeing the relationship between elf and orc change. In the end it was really sweet, though still weird. I do hope our elf is able to keep her fetishes to a low point though, as really, girl. Just no.

Oh, and it was hilarious that THAT one thing turned them on the most.

Fabulous art, I really liked how the characters were drawn.

So all in all, a weird manga, but I still enjoyed it. Not sure if I would recommend it though. 😉