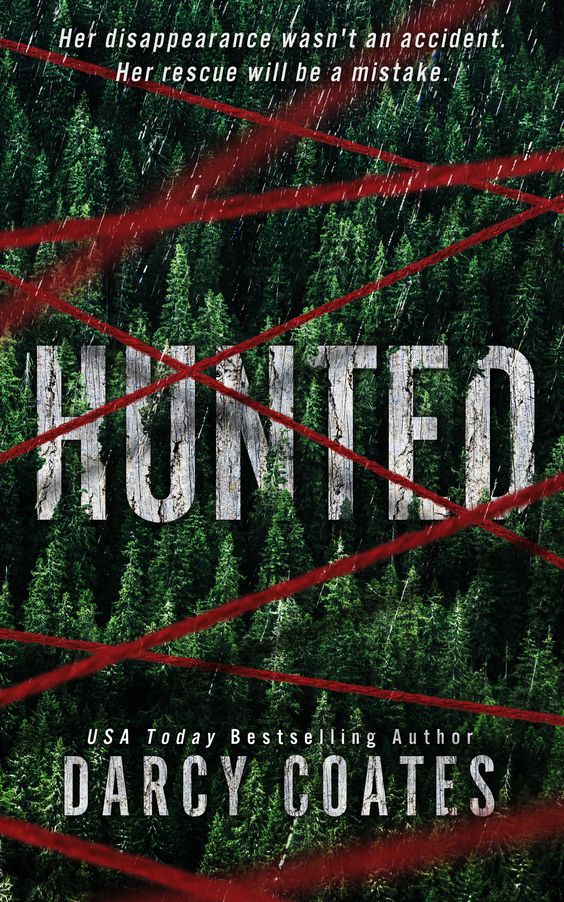 She only went off the trail for a moment…

Oh boy, I was excited about this book. First of all because of Darcy Coates who writes some of the most amazing horror books, but secondly because this was different from her usual work. Those feature haunted houses that will murder you in your sleep, while this one was about a girl who got lost in the forest, met with a monster, and then how her brother and friends, the police, went to search for her and uncovered something gigantic. I have to say that it had a bit of a slow start, I didn’t like Todd, but that after a while I settled in, the story got creepier and better, and I just couldn’t stop reading. I just wanted to read, read, and read. I needed to know if the characters would be fine. I wanted to know who the monster was. I wanted to see them captured. The parts in the woods were delightfully frightening, and maybe not the best to read while it was dark outside, but eh.

I first want to address the characters/POV.

We have several POV. Todd (urrghhh), Chris (what are you doing?), Carla (ah look a stone-cold police officer). Later on Hailey gets the spotlight as well. Then there are short POV spotlights for Eileen, Flint, and a guy who finds something of hers while fishing. Not counting those short POVs as they lasted only for a chapter, from URGHH to OK, these were the rankings for those POVs: Todd, Carla, Chris, Hailey.
If I had to rate the characters I would say Anna and Hailey were my favourites.

Yep, I had serious issues with Todd, I even considered dropping the book, thankfully something happens. No, I am not saying what, but it did solve the problem for me. Yes, I feel bad for saying that, but sorry, Todd was a creep. He was disturbingly icky. I can imagine that people may not want to have him around. He was obsessed with Eileen, to the point that he was just sitting at his PC for her to post pictures of her trip. Even minutes after her being late he considered calling the police/Chris (the brother). What the actual hell man? There are various other instances that just made my skin crawl. But I really want to stop talking about Todd. Yucky dude.

Carla. Phew. I disliked her so so much in the beginning. Up to the point that yes, for her I would also have dropped the book. Thankfully, the author showed us what was going on in Carla’s head, and her life, and it made me like her more. I could imagine why she was acting like this. She has gone through a lot, is still not in the right mindset. Plus, in the middle when she finds out stuff about the mountain/what is going on there, she really turns around and shows a cop who is kind, determined, and set to help out people (instead of making harsh comments and just letting them rot). As the story continues we see that Carla is really getting more and more determined, and I started to root for her to solve the mystery, capture the bad guy, and find some happiness as well.

Chris. Well, I could understand his determination, but I do wish he had listened to his friends. That he had been a bit more open. He pushed through, and I understand that he wants to find his sister, but this is not the way to go. You are just blindly wandering around without much of a clue (especially true after a certain point). One of your friends is in pain, yes, he says he can continue, but really? So yes, I am a bit conflicted on Chris. On the one hand I could understand him, on the other I wanted to throw him to the monster.

Anna, ah, Anna. I just liked her and how smart she was. How she was happy to help, and how she was fundamental to our group and their survival. Really, they wouldn’t know what to do if it wasn’t for her. And I loved that she knew, or had at least a good guess, how people were. I liked that she knew she came over a bit strong, and even talked to Chris when he was frustrated with it (as he wanted to lead the search party).

Hailey, I just loved that girl. How she seemed to be a girl without much content, but then you started to get to know her and you saw she was actually really smart, interesting, and wow. Her knowledge of medical really helped our team out quite a few times. My love for this girl went up when she did that nearer to the end. Add strong to one of her points. Her encounter with the monster made me want to go into the book and just kick the monster to stay away from Hailey. I loved that, unlike Chris and Flint, she actually thought of what Anna had given each of them. A map and a compass.

The story gets creepier with each passing page. The forest are already a freaking factor over 9000 of nope, and then there is also something lurking in the forest. Something big, clawy, and eager to hunt you for the whole evening. I was constantly on guard while reading, I just knew that as soon as the night fell something would be there. Something lurking. Something NOPE. The author really wrote a terrific atmosphere. It was like I was there with the characters, surrounded by a forest that doesn’t let in much light, will confuse you to no end.

There is, as with most horror books, a lot of horror stupidity. For instance that the group didn’t think to also mark their way through the forest by adding a line on the map, or looking which direction they were going. They just relied on that rope, but I knew already that that would be futile. Come on, there is a big baddy wandering around doing God knows what to people, and you rely on a flimsy rope? I would have held the compass, made sure to note what way we were walking, and also drew on the map where we went, plus add some stuff we encountered on the way. But these kids just blindly go forth, and then expect to get back easily and breezily. sighs
But also other instances that just had me snorting. Oh well, I guess in a way I also kind of like that stupidity. I am not to sure how to explain, but for some reason I think without that stupidity horror books would be just too serious. Sometimes one just need to have a bit of a laugh in all that creepiness.

So when Carla went to search, and sure she had the knowledge, but still, I just laughed so hard.

The who or what the monster was. Well So I just want to give applause to author for writing it so exquisitely.

I have loved this book a lot, but due to the slow start, some of the stupidity, and of course let’s not forget icky Todd, I just couldn’t rate this one 5 (or 5+ stars). Instead I settled on 4.5 stars.

Phew, this review has gotten quite long, I will just end this review with a “I would recommend this to everyone-statement”, because really, after you have gotten through the slow start and , you will not be able to want to stop or drop this book. Be warned not to read this one when it is dark out.
As for me? I cannot wait for the next Darcy Coates book.