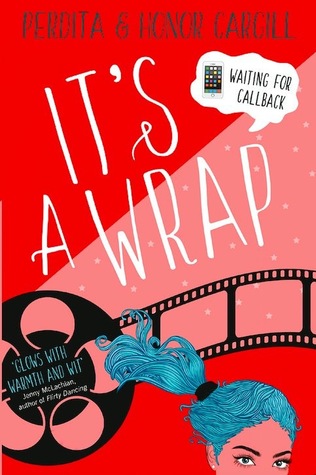 The final Waiting for Callback book, and boy, I will miss this series! It was a fun ride with fantastic characters, lots of humour, acting, auditions, romance, and more.

I am so sad, this is the final book in the Waiting for Callback series, but I just want more and more of it. Though I have to say it is tied up nicely, but still, give me more Elektra. Auditions! Drama! Romance!

We start this book with a birthday bash gone bonkers. Sweet 16 Elektra! It also brings a certain boy back to town, this time with a cute puppy! swoons

And then the book really starts, Raw is now finishing and there is a lot of promotional work to be done by all the actors. Things like social media, interviews, photographs, you name it and it will be done. There are also some retakes, and then later on the trailer. I have to say I still have no clue what the movie is about, but I guess that is part of the charm? It is so bad it is good? 😛

Next to that Elektra is on the hunt for new auditions and she really lucks out with a fun guest role in a big series. I had so much fun reading those parts, especially that boobie accident. She is having a lot of fun with the role, and I was so happy for her. Though also worried for those around her should she ever have to dance. grins

And of course it is an important year for Elektra with exams looming in the horizon. Very important exams even, and she really needs to revise, study, revise, and do all the work.

I am happy that we also get a nice heap of romance between Archie and Elektra. They are such a cute couple, though I have to say it felt a bit stilted at times, not sure how to explain, but sometimes I just missed that spark. The spark I saw in the other book.

I adored that, like the other books, we have mails, newspaper/magazine snippets between the chapters or in the middle of the chapters. And let’s not forget scripts.

Moss shouldn’t be so eh about Carlo and Elektra being friends. Come on, Elektra is happy with Archie, and you are continually on her case because she texts the guy you like (but all the while you refuse to talk to him as he is a man and an actor and blabla). Because the guy texts back. In the end I had a big laugh at what Carlo and Elektra did to really and FINALLY convince Moss that they were just best friends. Hello, guys and girls can be friends without romance or love.

I was pretty pissed at Fionaaaaaaaaaaa and her PR stuff. Really woman? Instead of briefing or having a slight understanding of Elektra and her life (and the exams she has to do) you kept pushing her even to the point that you just took over her accounts and then was surprised when poop hit the fan. Sorry, maybe this woman should get a bit of empathy training to learn how to work with people (and especially teenagers).
Of course, maybe Elektra should just have said no and continued on or given up the whole thing in the long run, but I can very much understand why she choose to hand it over. She is busy with work, with exams that are coming up, she is doing auditions, the poor girl barely has any time left. And then she is getting pushed by people around her to participate in promoting and all that crap. The pressure is real.
I was a bit surprised that she knew so little about Twitter, I guess it is true what the newspapers here say, Twitter and Facebook aren’t popular with the teens.

I am kind of disappointed in the ending, I really wanted to know more about Eulalie and that ring she had around her finger! Give me that story! Plus, I would have loved to see more of Elektra as Clemency, it is a role perfect for her. Oh oh and let’s not forget that part where Archie said a certain thing, I want Elektra tell him the same thing! Eep!

While I do love the new cover and that the whole series has had a whole rehaul, I am also very sad, as I now have 2 books in the old covers and one in the new one. sad face

All in all, I could probably rave and hype about this book for a long time, I am sure I missed mentioning some stuff, but I don’t want to make my review too long, so I will stop here. I will just finish with that I would recommend this laugh-out-loud series to everyone in need for drama, romance, dogs, auditions.