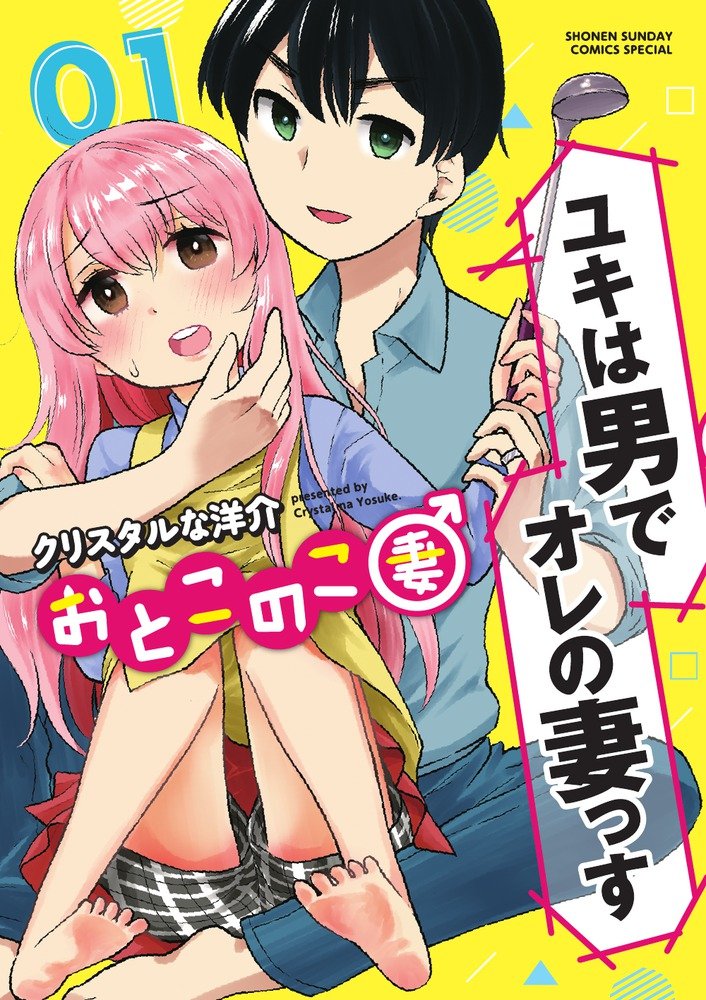 My wife is a man! Let’s start with tons of chaos and people who are confused! But also tons of cuteness and romance.

I saw this title and just couldn’t resist not reading it. Oh boy. The manga starts off right away with Yukio and Kou in the same toilet, for men. For Kou it is no problem to be there, but Yukio looks like a very adorable and pretty girl, so you may now imagine the looks of the guys who are already there. Especially when Yukio starts peeing. Yep, dreams shattered. So many dreams.

And that sets the premise for the entire volume. We see Yukio go through daily life, meeting up with his sister-in-law (who just wanted him there so she could try out the limited edition x kilo poundcake (as for that you need a guy)), going on dates with Kou, being the perfect househusband (or wife) for Kou, and more. We learn that Kou isn’t a cross-dresser normally, but that he is doing it for his hubbie Kou. Kou always gets so happy when Yukio is wearing and looking feminine, and Yukio wants Kou happy. Other than that Yukio definitely identifies as male. At least he always corrects people when they call him a girl, and when his mom (during a visit) calls Yukio Yukiko (female name), he even shouts: “I said I’m a man!”.

It all sounds really sweet, and I can see that Yukio is perfectly happy being in dresses and feminine stuff, but at times I wonder if their relationship would also work if Yukio just wore boy clothes. I guess, given Kou, it would be a yes. These two have known each other for years, and back before they went further than friends (Yukio was in love with Kou), he asked Kou about it. And Kou said that he didn’t think anything was wrong with it, and that there is no rhyme or reason to whom you like. Cue in the awwwws. I am glad that they added a bit of a backstory in it, though I have to say I was a bit shocked (if that is the right word) when Kou didn’t want to see Yukio for a while after Yukio confessed!

But yeah, I would like to see Kou and Yukio together as men, even for a bit, like when they are both at home.

Most of the time the manga makes the cross-dressing and their dates all seem hunkydory and perfect, the only thing Yukio is doing is breaking hearts when people find out that instead of a cute girl there is a cute boy. But still Yukio does get into trouble when he needs to identify as a man and he can’t do that easily (then again, he could just show them his ID/passport).

Oh, and before I forget, I am quite happy that Yukio’s parents are so supportive of Kou and Yukio. I am so used to crappy parental units in anime/manga that this was a happy surprise.

The art is just adorable! <3

All in all, I need more of these two in my life. I will keep on reading this series!