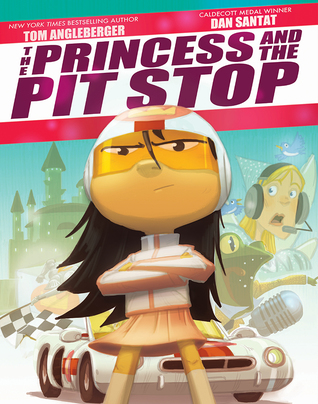 How could I resist this book when I saw it? A princess? Auto racing? A cover that promised some awesome illustrations.

I just love princess stories, heck, even my blog name is Twirling Book Princess (though that mostly has to do with my fiance). I was definitely interested in seeing how a princess + auto racing would come together and fit together.

From the first page I was hooked. I mean come on, her pit stop team was a caterpillar (Alice in Wonderland?), a fairy Godmother, a dwarf, a hare, and a pig. It was fun that the book didn’t start with the start of the race instead taking us much further into the race, having the princess at the last place. Oh my!

It was so much fun seeing her pass all kinds of fairy tales, with a rainbow tail to have people remember her. The author did a terrific job on making the story engaging, fun, and hilarious. Though sure, I have to say at times it was a tiny bit repetitive, but generally I was curious to see what she would pass next and what kind of text (and imagery) would accompany it.

I loved that there were appearances from other fairy tales. Humpty Dumpty, Three Bears, Wizard of Oz, Withes from Hansel and Gretel, and many many others. They are all in this race and they are all in it to win it. I hadn’t expected them to actually be part of the race, oh no, I actually thought our princess would just race past their respective countries/stories. I am glad that the author decided to make them competitors in the same race.

We already knew this was inspired on Indiana 500 (or something like that), but the ending was even more like that. Normally, I wouldn’t know this as I don’t want that stuff (I love the cars and the idea of fast cars, but not the races as they get boring fast), but my father in law watched quite a bit of it during our vacation. 😛

The art is just fabulous, it is dynamic, fun, and the artist just captures the motion and fastness of the cars perfectly. Plus I just adore the style.

All in all, a terrific book that I would highly recommend if you are looking for a princess story with something different from the normal ones, no glitter here, just grit and awesome driving.