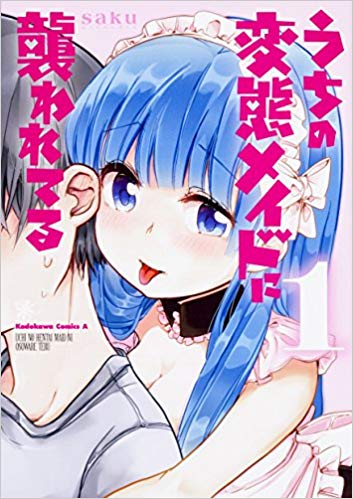 Especially since the guy is not at all happy with the maid, or well, as the manga progresses you see him grow fond of her, but at the beginning he is quite grumpy about her at times. All he wants is a silent life (he is a big introvert), but he is stuck with a girl who wants to do all sorts of ecchi things (and also has no care about carrying around sex toys). He actually doesn’t want to do anything, only with someone he loves. Yup, we have found a guy, in a manga, who is actually trying to resist temptation. And temptation he gets. At first from our hentai maid, but later on from a childhood (if we would call it that) friend who is calling herself his fiance. Insert some more chaos and hilarious situations.

Plus there is also the girl from his class, who is a complete ditz. I had such a laugh how she didn’t know what sex toys were and that she even thought one of them was a cute little pencil case. Oh dear. What could possibly go wrong here?

There is one flashback to a girl our MC liked back then, and I do have a suspicion who it is going to be. Come on, how many times have we seen that happen in manga or anime. I do hope that the author will make it something special though, and not a cliche.

I laughed so much with this one, the situations they get into, the ways the girl tried to get the guy to do stuff. I am kind of curious to see their relationship develop, and if the guy will ever give in to the temptation.

The art is really good, I love how cute the girls were drawn (sorry, the boys were just a bit bland in comparison).

All in all, a hilarious, at times a bit sexy, volume with great characters.