Welcome to a Double Cover Reveal! Yep, I am not revealing just one cover today, but two! Wither and Wayward by Jadie Jones. They are, respectively, book 0.5 and book 3 in The Hightower Trilogy.

Oh, and not only am I revealing double covers, I also have a double excerpts for the books, and of course we can’t forget about the giveaway!

A choice has to be made…

Soon all will be revealed! 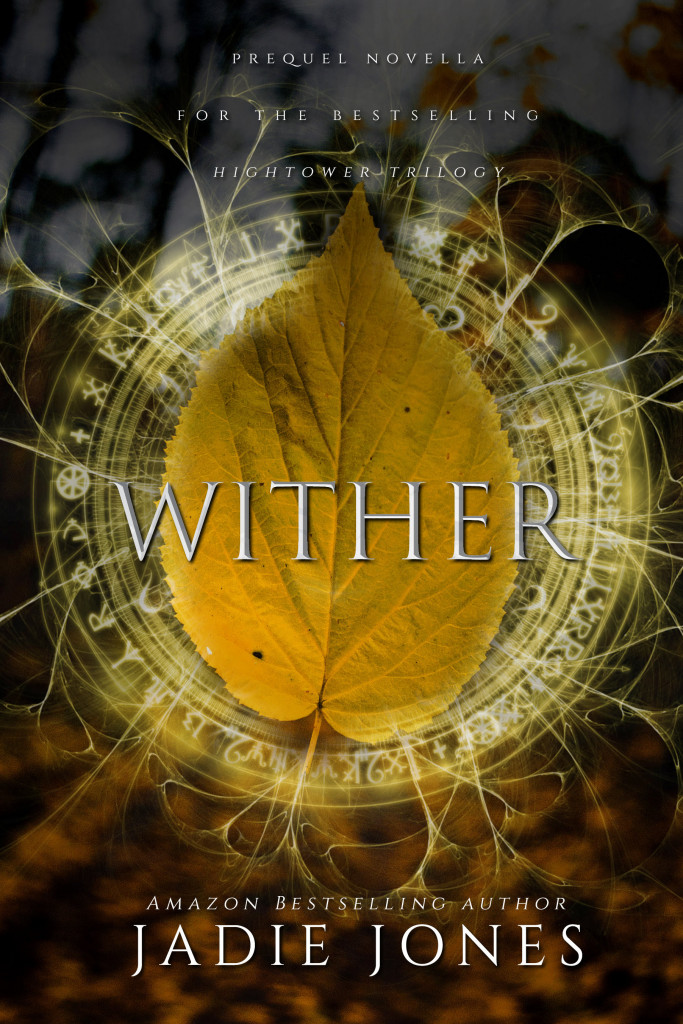 For nearly a thousand years, Lucas, an immortal shapeshifter, has waited for Spera, his murdered human lover, to reincarnate. He has no way of knowing when or where she will return, or if she will even look the same in her new life. He must rely on his ability to recognize the actions of her fiery soul and her knack for attracting a killer king’s attention.

After his search leads him to a quiet Norwegian harbor town, a surreal encounter with his own kind leads to devastating consequences, causing Lucas to question his belief in himself and his quest. With his will and options quickly fading, Lucas is offered help from an old enemy who claims to have knowledge of
Spera’s return. But it comes at a price: the assassination of the immortal king who took Spera’s life.

With an army raised and a strategy in place, Lucas is ready to attack, until the sudden appearance of a ghost from his past appears, forcing Lucas to take an even bigger risk than attempting to kill a malicious king…letting him live.

Spera’s amber eyes appear first, burning two holes in the dark of my sleeping mind. She’s inches from my face, but she doesn’t see me. No matter how many times this happens, the utter lack of recognition is a knife in my chest.

“Spera,” I hear my voice rasp, her name echoing in my skull as she turns away, her black hair blending into the night that surrounds her.

Another dream. Always the same. Chasing this dead woman through the dark.

I know how it will end: I’ll wake up calling for her, begging her to stop, to turn around, to give me any sign she knows I’m there. She won’t. She never does. But I have to follow her. The ache in my chest grows deeper the farther she goes from me. So, I follow after her, Spera navigating shadows like a ship through still water. I follow in her wake, always trailing, always two steps behind.

She startles me by breaking into a run. She’s never run before. Her bare foot touches the ground, and the black surface turns white. In an instant, snow is falling, blanketing the ground at an incredible rate and speckling her hair with tiny white dots. Another step, and the world around us pulses as the snow gives way to the greens and browns of a forest, trees thick as houses. Another step and the shadows return. The side of her face appears. Her lips part and air rushes out. Her elbows pump as she strides faster, harder.

“Wait!” I bolt after her. My conscious wrestles with the dream, threatening to roust me from this place. My focus clings to the outline of her bare shoulders, to the glint of light from sources unknown playing off her dancing hair. I want to stay where I can see her.

Before my eyes, the color of her hair shifts from black to brown, and then to red. The length shortens, and then spills long down her back again, now changing to blonde.

She veers hard to the left and a ray of light pierces the dark, illuminating her side. She runs toward it. Her image is reduced to an outline as she eclipses the glow. I scramble to keep up. We turn again and the light fades, revealing an inky blue backdrop. The ground turns cool and damp on my bare feet. A roar grows overhead. The scent of salt fills my nose. The sensations are so vivid I have to remind myself I’m asleep.

I force my gaze away from her for a moment and look up at the blue walls, which quiver with instability. Water. We’re standing between two bodies of water that stretch so high I can’t discern where the water ends and the sky begins. A single bead of ocean water trickles down the left side to the black sand at my feet and my heart begins to pound. 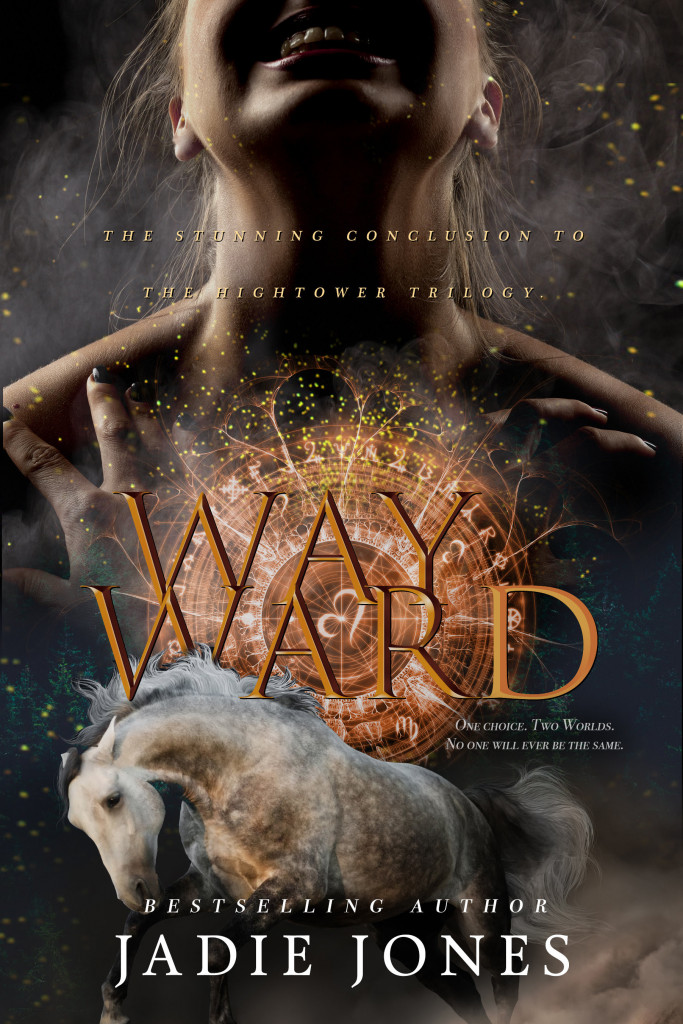 Tanzy’s journey races toward an explosive end in Wayward, the third book of the Hightower Trilogy.

Tanzy Hightower has crossed the veil between the Seen and Unseen worlds. She is now the only mortal in a land teeming with creatures who want her dead. To stay alive long enough to stop Asher and seal the door between worlds, she is forced to accept his marriage proposal and seek refuge inside his fortress. Tanzy is certain she can withstand any offers he makes to tempt her into opening the door, but he possesses a bargaining chip she could never have imagined.

On the Seen side of the veil, Tanzy’s allies are fragmented, lost, and leaderless. They must learn to work together as they gather more candidates and begin training to defend their world against unfathomable predators poised to strike should the veil holding them at bay dissolve. While Tanzy has accepted her own inevitable death in fulfilling her destiny, her closest friends refuse to stop searching for the impossible: a way to save Tanzy’s life.

A choice will be made. The veil will change. The worlds as Tanzy knows them will never be the same.

(Told from Tanzy’s point of view)

Asher’s realm stretches in front of me: a diamond tundra, the air a series of rainbows as light is refracted from the prismatic ground and reflected a million times over. The sight is impossible, glorious, breathtaking…

But my mind, my focus, my every nerve ending is centered on what—on who—is behind me; the king of this realm—Asher. His breath warms the base of my neck, and the heat from his body is near enough to send shivers up my spine. He baited me into a third kill by sending a phony candidate to attack Jayce. Jayce—who fought for me, and fought like hell for the truth—always the truth. Jayce, who might be dead, whose blood covered Reese’s shirt when she was forced through the veil with me after I killed Genesis.
In this moment, I have two truths: One—I must kill Asher, even though I have no idea how. Two—if I lose ground to Asher, I will not regain it.

My body explodes into motion. My heel aims for the dip between his thigh and his knee. Asher is faster, dropping his leg back. My momentum carries me too far forward. I stumble sideways and brace for the blow I’ve left myself open to receive.

I fight the urge to back away. I can’t run from him—there’s no point, and I swore I would never again back down in his presence. A stupid oath, in hindsight, but it sounded good at the time, and I am roughly ninety-five percent certain he won’t kill me here and now. I also vowed to live long enough to seal the veil between our two worlds. In this moment, with that five percent feeling bigger by the second, I’m not sure I can keep both promises.

In white linen pants and a fitted t-shirt, Asher doesn’t look dressed for a fight. He puts his hands in his pockets and saunters closer, a smile on his white lips, sunlight gleaming in his black hair. “We both know you can’t kill me on my side of the veil, Tanzy. And if I wanted you dead, I’d simply leave you for the Taigo,” he says. “Any of them would be very eager to collect the bounty their leader has placed on your head.”

“I’m an Unseen now. No one can kill me here but you,” I retort, clenching my hands so he won’t see them tremble. I wonder if they’re still stained with Genesis’s blood.

Asher’s brow lifts in amusement at my misinformation. “You’re not Unseen. You are very capable of dying.”

Young-adult author. Equine professional. Southern gal. Pacific Northwest Transplant. Especially fond of family, sunlight, and cookie dough.​​
I wrote my first book in seventh grade, filling one hundred and four pages of a black and white Mead notebook. Back then I lived for two things: horses and R.L. Stine books. Fast forward nearly twenty years, and I still work with horses, and hoard books like most women my age collect shoes. It’s amazing how much changes… and how much stays the same.
​The dream of publishing a novel has hitch-hiked with me down every other path I’ve taken (and there have been many.) Waitress, farm manager, road manager, bank teller, speech writer, retail, and more. But that need to bring pen to paper refused to quiet. Finally, in 2009, I sat down, pulled out a brand new notebook, and once again let the pictures in my head become words on paper.
​As a child, my grandfather would sit me in his lap and weave tales about the Cherokee nation, and a girl who belonged with horses. His words painted a whole new world, and my mind would take flight. My hope – my dream – is that Tanzy’s journey does the same for you.