Welcome to the Nerd Blast for D.J. MacHale’s newest book (and book 3 in the Library series): Oracle of Doom!

For today’s Nerd Blast (!!) you will find out all about the book and the author! But let’s not forget the giveaway, you can win a whole lot of awesome things! 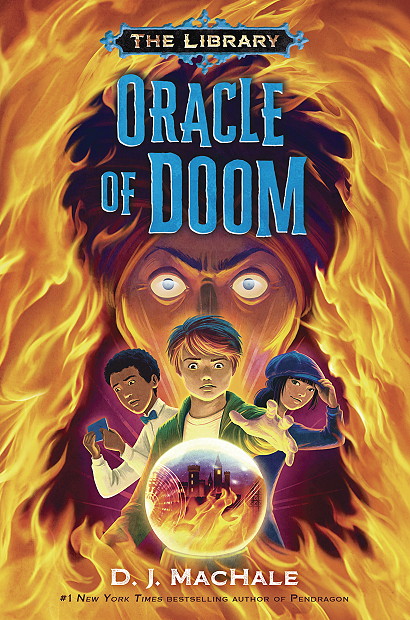 Marcus is an agent of the Library, a place filled with tales that don’t have an ending. Puzzles that won’t be solved until Marcus and his friends step in to finish them. This time it’s their own stories at stake.

Theo just visited the Oracle Baz, an old amusement-park machine that spits out fortunes for the cost of a quarter. Fun, right? The only problem is, the oracle’s cheap predictions have been coming true . . . and Theo’s fortune says that life as he knows it will end on his fourteenth birthday! Plus, Lu’s cousin, who also went to the oracle, is missing.

Marcus knows where to find help for his friends–the Library. It turns out that the Oracle Baz was a real man who died in a fire long ago. Can a glimpse into the fortune-teller’s past change all their futures?

D.J. MacHale is a writer, director, executive producer and creator of several popular television series and movies. As an author, his ten-volume book series: Pendragon: Journal of an Adventure Through Time and Space became a New York Times #1 bestseller.
He was raised in Greenwich, CT where he had several jobs including collecting eggs at a poultry farm; engraving trophies and washing dishes in a steakhouse…in between playing football and running track. D.J. graduated from New York University where he received a BFA in film production.
His film-making career began in New York where he worked as a freelance writer/director making corporate videos and television commercials.
D.J. broke into the entertainment business by writing several ABC Afterschool Specials. As co-creator of the popular Nickelodeon series: Are You Afraid of the Dark?, he produced all 91 episodes. D.J. also wrote and directed the movie Tower of Terror for ABC’s Wonderful World of Disney. The Showtime series Chris Cross was co-created, written and produced by D.J. It received the CableAce award for Best Youth Series.
D.J. created and produced the Discovery Kids/NBC television series Flight 29 Down. He wrote every episode and directed several. His work on Flight 29 Down earned him the Writers Guild of America award for Outstanding Children’s Script and a Directors Guild of America award nomination.
Other notable television writing credits include the ABC Afterschool Special titled Seasonal Differences; the pilot for the long-running PBS/CBS series Ghostwriter; and the HBO series Encyclopedia Brown, Boy Detective for which he received a CableAce nomination for writing.
In print, D.J. also authored the supernatural Morpheus Road trilogy; a whimsical picture book The Monster Princess; and The SYLO Chronicles, a thrilling sci-fi trilogy. He also wrote Voyagers: Project Alpha, the first of a six book science fiction adventure.
D.J.’s newest book series is The Library, a spooky middle-grade anthology about a mysterious library filled with unfinished supernatural tales, and the daring young people who must complete them.
D.J. lives in Southern California with his wife Evangeline and daughter Keaton. They are avid backpackers, scuba divers and skiers. Rounding out the household is a spoiled golden retriever named Casey and an equally spoiled tuxedo cat named Jinx.