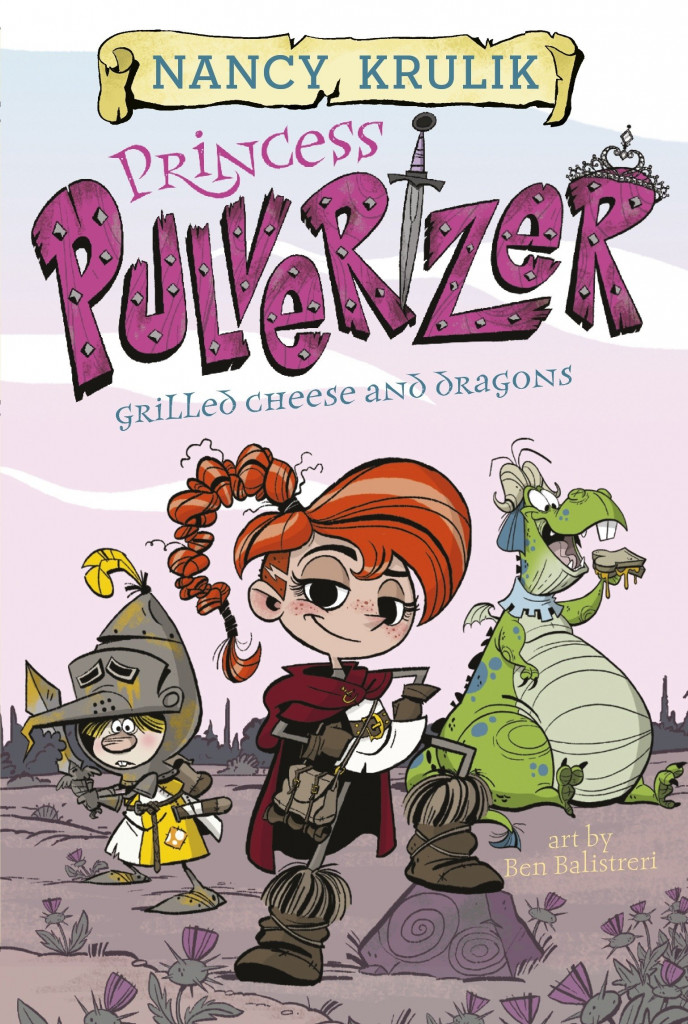 Meet Princess Serena, or no, I should say, Princess Pulverizer!

This is a girl who wants to be a knight. Yup, she is currently at princessschool but that just isn’t the place for her. Curtsies? Eww! Learning how to dance? Ehhhh.

But before she can go to Knightschool, she has to go on a quest! Completing 8 kind deeds, and our first one is going to be getting back those gems from a big bad ogre. I had lots of fun seeing her try to get those gems back, from singing (no, not the good way) to get captured, to trying to get out to find those gems.

And then she meets two other characters, Lucas, who is a tiny knight and a wimp at that, and Dribble, a dragon who wants to be a chef (yes, really). I wasn’t an instant fan of both of them, but as the story continued I liked them better. I am definitely curious about those grilled cheese sandwiches.

I have to say that I wasn’t quite enthusiastic about our princess. I thought it was really cool that she wanted to be a knight, that she didn’t want to be saved by boys or anyone, and that she could kick some serious butt. BUT. Yes, a big but. She was quite mean at times, thought she could just do anything, and when she heard she had to go on a quest of kindness she was trying to think of ways to just get out of it. She even threw a tantrum because her daddy wouldn’t give her whatever she wanted. Not to mention that there are other times that I just wanted to grab her and throw her away.

But sure, as the book continued our princess learns some valuable lessons, including teamwork, grilled cheese is delicious, and how to be kinder to those around her. She is also finding out that maybe, just maybe, those few princess lessons do come in handy (especially when meeting a queen).

I was already wondering what kind of items she would receive upon doing the good deed, as she does need to show her dad something, but our first item is quite fun and probably will come in handy in the future quests.

Yes, future quests! Our girl has to do 8 kind deeds, and this book just has the first one. So I am guessing we will get 8 books in total, unless our princess does more than one.

The book is also filled with illustrations, and I just love the design of our princess, she is just as I would imagine her, tough and kick-ass.

All in all, I had fun reading this one, and I want to see more of Princess Pulverizer’s quests/adventures.