A spooky short story collection with all sorts of Halloween stories. Trick or treat! 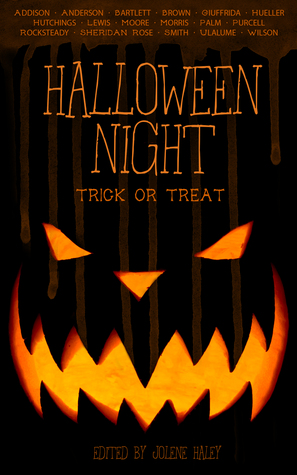 I am always a fan of short stories, sometimes you find real gems in them, some people are really masters at writing a wonderful and creepy short story. This book was a bit of a mixed bag, but I had kind of expected that. Different writers, different styles, and the stories just didn’t always work for me. I am still delighted to have read these stories, and that I read them during the day.

So, for each story I wrote a review + gave the stories a star rating.

This one was pretty disturbing. I had an inkling as what was going on with these kids, and their parents of course, it was obvious they were hiding something. That they were something else. But what? Oh, I am not going to say what. It was a short story, but I quite liked the length, any longer and it would have ruined the mood, it would have made the story less disturbing and scary. Also, nice that this one is from the POV of the parents. Reminiscing the past, warning the kids, making sure everything was done right.

Sorry, I just can’t, I just don’t know what to rate this one.  It was a pretty OK story about a boy getting revenge from a witch, and I kind of expected something horrible to happen, but sorry, I just can’t forgive what the kid did. What the fuck is wrong with you that you would do that. That is no prank, that is just beyond that, way crueler, and I think maybe someone should just, lock that kid up? I was even more disgusted by what he did than what his punishment was. Don’t eat while reading this one. Be warned.

Story 3: Give Us Something Good to Eat: 1 star?

Sorry, I am not too sure about this one, it was pretty bland, and boring, and I thought there may be a twist about the Hell House, but no. And then there is the ending, so, what am I supposed to draw from that? RIP the kids? Something else? Watch out for picture-perfect homes?

First up, Tania, please, if your friend doesn’t want to do something that is totally fine, and you should respect that. Oh well, I guess we wouldn’t have a story otherwise. 😛 But this one was much better than the previous story with a nice twist at the end! Oh dear, oh my. Someone should tell this old lady how Halloween works! cackles Trick or Treat! I was properly creeped out.

A scary story, well, at first. About a girl alone during Halloween and a ghost who haunts her. It was very creepy, and I was devouring the story as I needed to know what was going to happen. Would she survive this night? What (or who) is the ghost? Will her best friend be able to help her out? But sadly, the ending was just disappointing. I had various expectations as to what the ending would bring, but I hadn’t expected this one. Lackluster at best, and so I am deducing a star or so from the rating.

Intermission: Just an illustration of a creepy house. Not going to give a rating.

Certainly, a bit frightful, but I don’t know, I didn’t like the brothers. I didn’t like how Andy treated his younger brother, nor how the younger brother kept wimping out and didn’t want to tell how he really felt about things. Like the house? That he wanted to do it first? Or when his brother went off alone to the house?

There were parts I did enjoy, the trick or treating, when our MC meets up with his brother (or is it his brother?) again, and the ending, sure, at least he stood up for himself, which made me happy. But it was a bit of a shame that everything ended like this.

Wow, wow, wow, I didn’t expect that! I was for sure Mark was x but he was actually y? Wow. Nice twist, nicely done author. I loved it. It was short, but really good. I wonder what will happen next, and what will happen when Halloween is over. I am also curious about the world, what happened here?

First up, points to the title! Such a fun title, and as soon as we learned of the woman’s name I understood the reference, and I was curious about the whole house and what those kids were! I wasn’t too sure about the story, the house was magical, the stuff was weird, the kids were creepy, the things he saw were magical and spooky. But Steven… Steven did some dumb stuff, typical horror stupidity. Opening stuff he shouldn’t open, going into rooms he shouldn’t go, etc. etc. Why do you do this? Why? At least in a way he was aware he was doing dumb stuff, which is a nice change. And the ending was also good. I am happy with it and what happened there.

Intermission: Haunter. Yet another tiny picture (at least on my Kindle). Not going to rate this one.

Ehhhhhh, what did I just read? Sorry, no. Not a favourite. Very harsh, I know, but sorry, I just don’t know what write here. So, this was a story about a teen who is violent? Who got hit? And then killed someone? And is apparently killing more people? I just felt really sick while reading this one. No. Just no.

Wth did I just read again? The weirdness continues. In abundance, pun intended considering the story. These kids (teens?) stumble upon a weird old house (though it looks pretty from the outside), get stuck in it, a bit like Hansel and Gretel got lured with candy, and then there is woman whose candy is also a piece of her? Eat to much and she disappears? But stopping with eating is impossible? You should see my face while I read this story and am writing this short review. It is a mixture WTF and ehhhhhhhh and maybe a hint ewwwww. I am just not sure what to think of this one.

This was kind of sweet, I guess, a bit weird, but sweet. I am happy that these two have a chance to have one more night together, one night to say their last goodbyes, give some last hugs and kisses. Halloween, the perfect night to wake up your dead loved ones. Hey, if it works? I hope both of them (and their friends) have a fantastic night together.

A bit slow, and I didn’t like Candy. Girl, please, I understand you want your candy, but what kind of sad person are you to do that to someone who is either not home/sick/or something else. I am sure there are more houses, a whole street or so of them. Do you really need to go that far?

The witch stuff? And what happens next. Eh darn it, I didn’t expect the story to go that route, I thought it would just be a bit of silliness, but instead something much creepier and gorier happened.

Using a Ouija board during Halloween? At a place where someone apparently crashed their car and drowned (along with their kids)? Perfect, right? No? Noooooooooo. I am already a big noper when someone talks about Ouija boards, but doing it during Halloween sounds like an even worse idea.

And leaving while still in progress of Ouija? Not the best idea. You know, maybe just me, but yeah, I think, after reading this story, we can all agree that maybe you should just all stick together and say byebye to the ghosts before running off. The ending was brilliantly done.

And so this collection ends. 13 stories, and 2 illustrations. It was hit and miss, but I found some new stories that I loved, that creeped me out. Would I recommend this book? Well, it is a nice bundle of Halloween stories, and for those I loved, yes, I would recommend it.