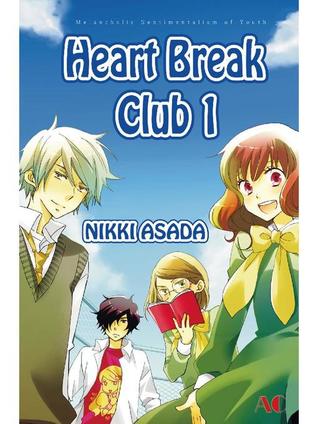 Welcome to the Heart Break Club. A club with 4 people, one girl (our MC) who, as soon as she falls in love, loses the guy to another girl. No clue how she does it, but it is one hell of a terrible superpower to have. Then there is the guy who looks fabulous as a girl and only turned to a girl side for his childhood friend who is a man-hater. The anime nerd who is very hot and I am sure has a backstory as well. Yori, the president, who finds love troublesome, which mostly has to do with her mom leaving her family for another guy.

They are all interesting characters and I am delighted that the author takes time to introduce us to these characters. The first chapter mainly focuses on our MC, the second one on Takeshi (the guy who had the long hair), the third on Yori. Of course even with those chapters being about those characters the focus is also on Nima and her bad luck with guys.

Really, it is one magical superpower that Nima has. One time she picked a guy from 10 photographs and within minutes he had a girlfriend, who wasn’t Nima. 😛 I actually feel sorry for the girl. Every time she looks so much at a guy or feels feelings for him she knows she will lose him.

We see her and Takeshi getting quite close, but Nima is trying not to fall for him, she doesn’t want to lose him, their friendship or love. is sad

I wasn’t too sure how I felt about the girls in the school all flocking to Nima for offerings and prayers. Guys, really? That poor thing keeps losing the guys she likes and all you can think off is that she is some kind of cupid. Why don’t you for once realise that this isn’t a superpower you would want to have, and that Nima is actually feeling dang sad about it?

We also meet a new girl named Kana, who has the reverse of Nima. If she falls for someone, they will fall for her. Seems kind of like an awesome superpower… but then we learn certain things about this girl, and hot dang. That is just effed up.

I guess I will need to find volume 2 as I do want to see how the situation is going to be resolved. What Kana is doing is a bad bad thing. 😐

The art is pretty great, I do like the style. I love how the characters are designed/drawn.

All in all, I already was in love with this series because of blurb/cover, but now I am in love further. This is one good story, and I am curious to see if they are able to help Nima.